Footballing superstar Pelé, who is Honorary President of the club, was present for the announcement at a packed press conference.

Although Emirates’ shirt sponsorship only began in June 2013, the reformed New York Cosmos have become the airline’s most successful team in the past year, winning the Fall Championship and the Soccer Bowl in the U.S.

“It would seem the Emirates’ magic has worked again, said Sheikh Majid Al Mualla, the airline’s Divisional Senior Vice President, Commercial Operations, Centre. “The New York Cosmos’ progress is nothing short of meteoric and the extension of our sponsorship agreement enables this wonderful journey with Emirates to continue. As our cabin crew say ‘Welcome back on board.’”

“We are honoured to be associated with such a world-class brand,” New York Cosmos Chairman Seamus O’Brien said. “This agreement underlines how much both organisations value this relationship and the new deal reaffirms Emirates’ belief in what we are trying to achieve at the Cosmos.”

“Emirates has played a big part in the reboot of the New York Cosmos,” Pelé said. “It’s wonderful that they’ll play a key role in the team’s future too and that we remain part of the Emirates’ soccer family.”

The New York Cosmos team, who arrived in Dubai last week for a training visit, have also been seeing some of the city’s tourist attractions, including the Burj Khalifa and Palm Jumeirah, as well as enjoying a desert adventure with Arabian Adventures, the destination management wing of the Emirates Group.

You may also be interested in:  Emirates is the Official Airline and Premium Partner of the Roland-Garros 2021 for the ninth consecutive year

Following today’s press conference, Pelé, a Global Ambassador for Emirates, provided a once in a lifetime opportunity for those present at the airline’s HQ by talking through some of the greatest moments of his remarkable career. Amongst them, being part of the winning Brazilian team at the 1958 World Cup at the age of just 17 and his first visit to Dubai in 1973.

“Emirates has laid on an unforgettable double-bill for invited guests and the media – first, the New York Cosmos press conference and then this unique session with Pelé personally sharing some of the moments that have defined his glittering career,” Sheikh Majid said. “And the really good news for our customers is that this special screening will be available for millions to watch on our award winning in-flight ice entertainment system.”

Pelé will kick off the 2014 home season with the New York Cosmos when he joins the team in New York for their match against the Atlanta Silverbacks on 13 April. 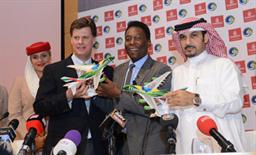