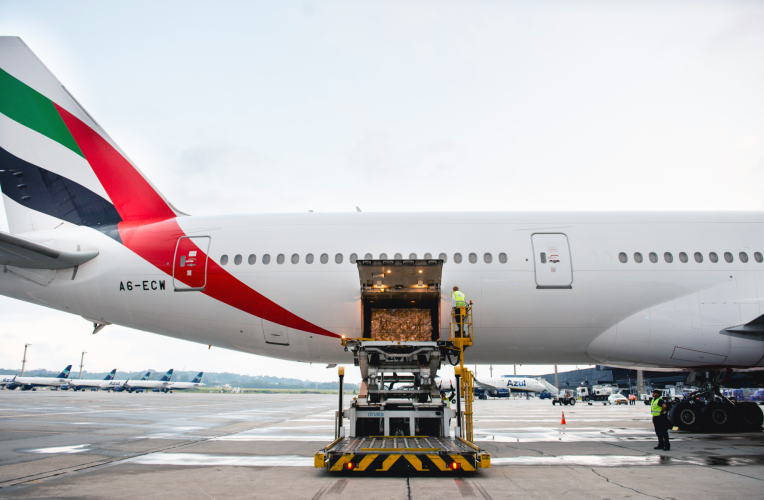 Dubai, UAE, 2020-May-12 — /Travel PR News/ — Emirates SkyCargo has announced that with effect from 3 May 2020, it has introduced weekly scheduled cargo flights on its Boeing 777-300ER passenger aircraft to Sao Paulo. This will allow for importers and exporters in the region to stay connected with their trading partners across the world with access to around 40 tonnes of cargo capacity on the lower deck of the Emirates aircraft.

In addition to the weekly scheduled flights, the cargo carrier is scheduled to operate multiple charter flights to Sao Paulo to transport medical supplies in the month of May.

Emirates SkyCargo was one of the first international cargo carriers in the world to help transport Covid-19 testing kits in late March and early April to Brazil with two Boeing 777-300ER aircraft flying more than 1.5 million testing kits. The air cargo carrier has operated five flights to Sao Paulo in the month of April.

Emirates SkyCargo has also operated cargo flights to other points in South America including Buenos Aires, Quito and Santiago during the last two weeks.

On the 5th of May, a special charter flight carrying urgently needed medical supplies such as face masks arrived in Buenos Aires on an Emirates Boeing 777-300ER aircraft. On the return leg from Buenos Aires, the cargo flight transported around 50 tonnes of Argentinian exports to various destinations in the Middle East, Europe and Asia. This is the first of two charter flights for medical supplies operated by Emirates Skycargo to Ezeiza airport in the month of May.

Emirates SkyCargo has also ensured that it continues to support exporters of flowers and perishables in Ecuador by operating four cargo flights from Quito during the last week of April. The cargo transported on these flights were mainly flowers and other perishables being transported to Europe.

Two special cargo flights were also operated to Santiago, Chile during the first week of May to transport more than 80 tonnes of medical supplies from Hong Kong. The flights were loaded on the return to Dubai with perishables including apples, salmon and other agricultural products such as seeds.

At current planning, Emirates SkyCargo is set to execute more than 10 charter flights across its South American destinations for the month of May.

Emirates SkyCargo is operating scheduled cargo flights to more than 65 global destinations. The air cargo carrier is deploying a mix of Boeing 777 full freighter aircraft with a capacity of around 100 tonnes per flight and Boeing 777-300ER aircraft with a capacity of around 40 tonnes in the bellyhold of the aircraft per flight. In total, the carrier operated more than 2,500 cargo flights in the month of April transporting essential medical supplies, food and other commodities.

Emirates SkyCargo is the freight division of Emirates. With an unrivalled route network, we connect cargo customers to over 155 cities across six continents and operate in many of the world’s fastest developing markets. Our cargo hold capacity comprises Emirates’ fleet of over 265 aircraft, including 12 freighters – 11 Boeing 777-Fs and one B747F. During the last Financial Year (2018/19) Emirates SkyCargo carried 2.7 million tonnes of cargo. Emirates SkyCargo has developed transportation solutions for specific verticals including pharmaceuticals and perishables. More details at www.skycargo.com