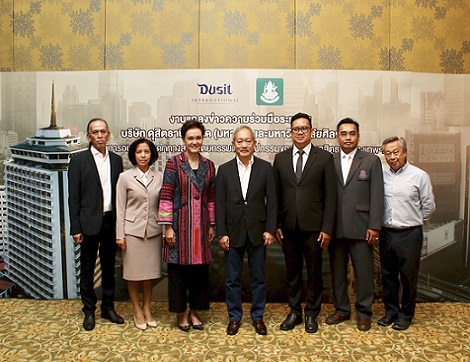 Hospitality company is delighted to partner with a leading educational institution with extensive experience in preserving items of historical significance.

Bangkok, Thailand, 2018-Dec-03 — /Travel PR News/ — Dusit International, one of Thailand’s leading hotel and property development companies, has partnered with Silpakorn University to launch a unique project to preserve the rich architectural and artistic heritage of the company’s iconic flagship hotel, Dusit Thani Bangkok, which will be redeveloped next year as part of a landmark mixed-use development.

Officially titled ‘Preserving Dusit Thani Bangkok’s Artistic Heritage,’ the project will see preservation experts from Silpakorn University carefully identify, document, dismantle and preserve key items of historical or artistic value in the property for use in the new version of the hotel, which is slated to open in 2023. Data and photographs of the project will also be presented in a digital book for those who wish to learn more about the original building.

Opened in 1970, Dusit Thani Bangkok is an early exemplar of contemporary Thai architecture which distinctively blends western modernism with traditional Thai design. Inspired by the great pagoda of Wat Arun (Temple of Dawn), the unique structure has long drawn the attention of architecture students impressed by its convention-defying form, which heralded a new era of development in Bangkok.

The hotel’s interior is also lauded for its rich artistic heritage. The Thai motifs and murals that adorn the columns and walls of the hotel’s signature Thai restaurant, Benjarong, for example, were hand-painted by Paiboon Suwannakudt, famously known as Tan Kudt, a neo-traditional Thai painter who was a key figure in the modern reinvigoration of Thai mural painting. His intricate paintings and murals will be carefully preserved for use in the new Dusit Thani Bangkok. Benjarong’s carved timber ceiling will also be carefully dismantled for use in the new hotel.

Silpakorn’s experts will also study the hotel’s distinctive landscaping, particularly the renowned waterfall garden, which provides a serene and leafy escape in the heart of the city. Prize trees will be documented and preserved as much as possible.

The ‘Preserving Dusit Thani Bangkok’s Artistic Heritage’ project was officially launched at a press conference held at Dusit Thani Bangkok’s Napalai Room. Speaking at the event, Mr Chanin Donavanik, Vice Chairman and Chairman of the Executive Committee, Dusit International, said, “My mother, Thanpuying Chanut Piyaoui, always believed in Thailand’s potential to become one of the world’s most successful tourist destinations, and she believed the best way to put Bangkok on the map, and support the kingdom’s growth in this regard, would be to create a distinctive hotel that complied with international standards while showcasing the finest facets of Thai culture. Dusit Thani Bangkok is the result of this vision, and the building’s unique design, décor and artworks are indeed representative of an era of great change in the country. With the hotel now about to undergo a significant change for a new era of tourism, we would like to preserve as many items of historical and sentimental value as possible. I believe our past is the inspiration for a sustainable future, and I am delighted we could partner with Silpakorn University for this unique project.”

Assoc. Prof. Sayumporn Kasornsuwan, Vice President for Art and Culture, Silpakorn University, said, “Dusit Thani Bangkok is an excellent learning centre for those interested in the development of art, culture and architecture in Thailand, and we are very happy that Dusit wants to preserve the key historical elements of its flagship hotel for posterity. Lecturers from faculties such as archaeology, architecture, painting, sculpture and graphic arts, as well as the university’s Art Centre and partners, will be heavily involved in this project. While it will certainly require a great deal of time, effort and finance, Dusit is determined to invest in the preservation of its heritage. It is an honour to take part in this project.”

Asst. Prof. Chawalit Khaokiew of the Faculty of Archeology, Silpakorn University, said, “This project consists of three parts. First, we will carry out the preservation work that covers the carvings, paintings and murals in Benjarong Restaurant, as well as valuable components of the hotel’s exterior. This requires an integration of disciplines such as painting, engineering, architecture and archaeology. Second, we will study the hotel’s architecture, landscaping and various historical artworks to create a scale model showcasing all of the building’s key elements. Third, we will help to promote the architectural value of the hotel through an exhibition of paintings by National Artists Sarawut Duangjampa and Panya Wijinthanasarn, and 18 acclaimed painters. This exhibition will be staged at the hotel throughout December until January 5th. Information collected throughout the entire research and preservation process will be compiled in a digital book to be shared with the public.”

Ms Suphajee Suthumpun, Group CEO, Dusit International, said, “It’s an honour to work closely with Silpakorn University to document the rich tapestry of Dusit Thani Bangkok in its transitional period. Silpakorn University is a time-honoured institution that stands out in the field of art and culture and in preserving and promoting the artistic and cultural heritage of the kingdom. This joint effort aims to preserve meaningful memories of the hotel and bring them to life once again in the next four years when the new Dusit Thani Bangkok opens its doors. We hope that the artefacts we preserve will create a warm atmosphere that delights new guests seeking new, impressive experiences, as well as regular guests who have an emotional attachment to the original hotel.”

Dusit Thani Bangkok will hold its last full day of operations in its current form on 5 January 2019.