Britnell’s appointment is effective Monday, May 19. He replaces Bill New, who retired in April after serving the Aviation Authority for 18 years, including six years as chief of police and six years as director of public safety.

“We had several outstanding candidates to choose from. It was a tough decision,” Campbell said. “Al’s experience with the Aviation Authority over the last 24 years gives him a valuable understanding of airport operations. That combined with his expertise in public safety is a plus for us as during an exciting period of change and growth at the airport.”

Britnell joined the Aviation Authority in 1990 as a patrol officer. He rose through the ranks being promoted to police chief in 2007 then to director of public safety in 2011. A graduate of Charleston Southern University, Britnell previously worked as a detective and patrol officer for the Goose Creek Police Department. Prior to that, he served in the U.S. Army as a light infantry sergeant with the 82nd Airborne Division.

“I’m honored and excited for the opportunity to work with the board, Director Campbell and the entire Aviation Authority team as we work to complete the airport’s renovation and begin to look forward to the next five to 10 years,” Britnell said.

You may also be interested in:  CCAA police Officers to be honored for saving the life of passenger that suffered heart attack at Charleston International this summer

Britnell is one of two deputy directors that assist the director of airports in planning, organizing, directing and controlling all activities necessary in the management of the Charleston County Aviation Authority.  Britnell also will manage and direct finance, properties, contracts and serve as a key member of the management team.

More than 170 applications were received for the position. 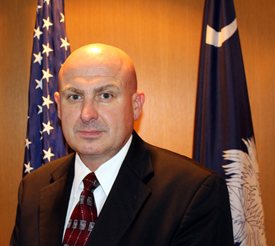