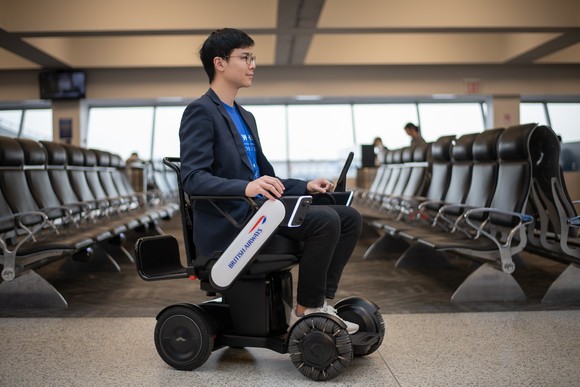 LONDON, UK, 2020-Mar-03 — /Travel PR News/ — British Airways has become the first airline to trial fully autonomous, electric mobility devices in North America as it continues its journey to become the airline of choice for customers with both hidden and visible disabilities.

Almost half a million customers who require additional assistance fly with British Airways each year and with this number due to rise by 10 per cent by 2021 the airline is exploring new ways to offer a seamless travel experience, including trialling self-driving, self-navigating, electric vehicles from Japanese technology firm, WHILL.

The devices, which were exclusively trialled by British Airways customers at New York’s JFK Airport, are equipped with anti-collision technology and allow customers to set their preferred destination anywhere within the airport. The vehicle safely navigates the terminal without the need for assistance from travel companions or the airport support team, currently responsible for escorting customers from check-in directly to the boarding gate.

Offering additional independence for customers who are unable to walk long distances but may not have their own wheelchair, the autonomous mobility devices give customers the freedom to explore the airport at their leisure, changing destination as many times as they like on their way to the boarding gate. Once they reach the gate, the customer alights and the device will self-drive back to the docking station ready for the next customer.

Ricardo Vidal, British Airways’ Head of Innovation, says the airline is trialling autonomous mobility devices as a direct response to customer feedback: “Our customers tell us they would like greater independence and control over their journey through the airport, so we were keen to trial autonomous devices and see our customers response to the very latest mobility technology in a real airport environment.

“Over the next few months we will be collaborating on a further trial at our busy home hub at Heathrow Terminal 5 to gather more feedback and explore the introduction of this technology alongside our team of customer service professionals to provide a truly seamless and accessible airport experience. I’m excited about the future of inclusive innovation to support the accelerating demand for accessible air travel.”

British Airways has invested in a number of initiatives to encourage more customers with disabilities to travel. The airline has seen customer satisfaction more than double for travellers with accessibility needs following the creation of a specialist acessibility team to support them before, during and after their journey as part of its £6.5 billion investment programme for customers.