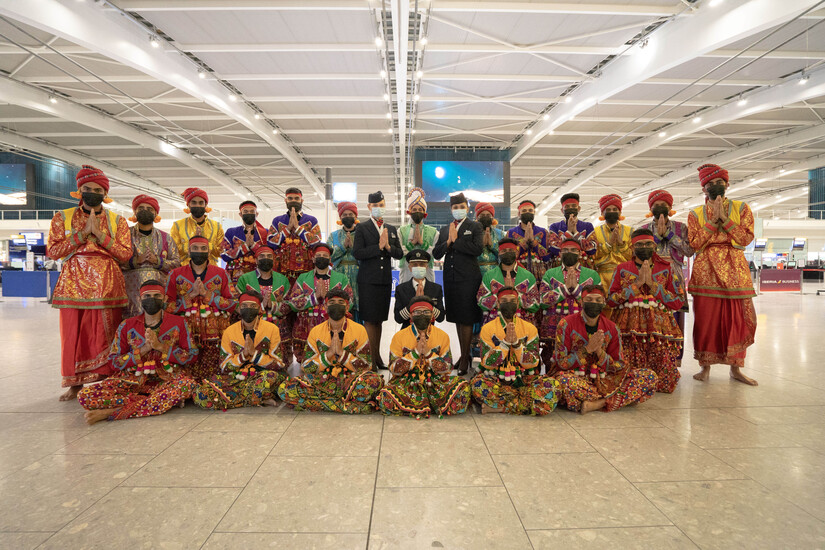 British Airways teams up with Neasden Temple for Diwali celebrations

Each year, millions of people around the world gather to celebrate Diwali, the festival of lights, with the UK proudly hosting the largest Diwali celebrations outside of India. To mark Diwali this year, volunteers from Neasden Temple put on a rangoli-inspired display to thank the airline for flying a relief flight containing vital medical supplies donated by the temple to India in the height of the Covid-19 pandemic this year.

The performance in the terminal included a traditional Indian dance routine to mark the celebration.

Carrie Harris, Head of Sustainability at British Airways, said: “We were really touched when Neasden Temple wanted to collaborate with us to host a special celebration of Diwali with our customers and colleagues as a thank you for supporting with aid flights this year to India. The event was a wonderful way to celebrate Diwali and spread joy over the Diwali holiday. We wish everyone celebrating this week a happy Diwali.”

Kamlesh Patel, a spokesperson for Neasden Temple, said: “Neasden Temple and British Airways have enjoyed many years of close collaboration on extensive relief work and as a gesture to thank them for all their help and support, we decided to bring Diwali to Terminal 5 and Waterside to celebrate this incredible festival with British Airways’ customers and colleagues.”

Captain Minesh Patel, who was instrumental in organising the relief flights to India this year attended the celebrations.

On 5 May 2021, British Airways, supported by its sister company IAG Cargo, flew 27 tonnes of medical aid to Delhi on its first relief flight. The aircraft was loaded with more than a thousand items from the High Commission of India and charities including Khalsa Aid International and the largest Hindu Temple outside of India, BAPS Shri Swaminarayan Mandir in Neasden, London, to ensure life-saving supplies reached communities in need. Supplies included urgent life-saving oxygen cylinders and shipments of oxygen concentrators, respirators and blood oxygen saturation monitors, with over 50 oxygen concentrators donated by the Neasden Temple. This provided life-saving humanitarian assistance to communities in India during the height of the pandemic.

British Airways and its sister company IAG also partnered with bp, NATS, Heathrow Airport and Indian ground handlers to support a second humanitarian relief flight to India along with charities including Oxfam, Khalsa Aid, LPSUK and Christian Aid. This flight, operated on the 21 May 2021, delivered a further 18 tonnes of medical aid including critical care equipment, PPE and oxygen concentrators.

In the UK, BAPS Swaminarayan Sanstha is respected as one of the largest and most active Hindu organisations within the Indian diaspora. It is especially known and respected for its multifarious community outreach activities and the internationally-acclaimed ‘Neasden Temple’ (BAPS Shri Swaminarayan Mandir) in London, where it is headquartered.

More information can be found at: neasdentemple.org