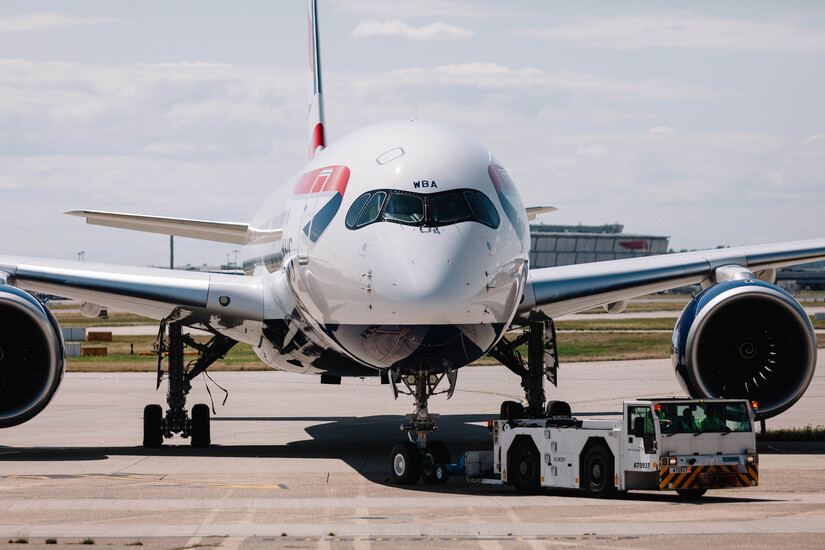 The Department of Transport’s Green Fuels, Green Skies (GFGS) competition has awarded the funding to develop the UK’s first sustainable aviation fuel (SAF) production facility. In total the Government shortlisted eight projects to potentially receive a share of £15 million in its competition, all of which have a clear potential to produce SAF capable of reducing emissions by more than 70% on a lifecycle basis when used in place of conventional fossil jet fuel.

British Airways is directly involved in four of those projects which, pending the completion of grant agreements, can all press ahead with developing their feasibility and engineering plans.

The airline is partnering with technology company Velocys on the Altalto project to build a commercial waste-to-SAF plant in Immingham, Lincolnshire. Altalto will take more than half a million tonnes per year of household and commercial waste and produce up to 80 million litres of cleaner burning SAF and naphtha. The project has already received planning consent from North East Lincolnshire Council and is in the final stages of preparation for Front End Engineering Design.

Project Speedbird is a collaboration between British Airways, LanzaJet and Nova Pangaea, with a goal of producing 100 million litres of sustainable fuel a year from 2025, sufficient to power 2,000 flights from London to New York operated by an A350 aircraft. The technology is based on Nova Pangaea’s REFNOVA® process of converting waste wood into alcohol. LanzaJet’s alcohol-to-jet (ATJ) technology, which was developed by LanzaTech and the Pacific Northwest National Lab, then converts the alcohol to produce sustainable aviation fuel and renewable diesel.

You may also be interested in:  British Airways launches its World Sale with huge discounts on flights and holidays across the globe

British Airways is also working on two further decarbonization projects with LanzaTech and LanzaJet that, if successful, could each produce more than 100 million litres a year of SAF. The first would involve capturing carbon dioxide (CO2) from the atmosphere and converting it into SAF. The second would support the development of a SAF plant in Port Talbot, South Wales that would produce SAF from waste and industrial gases, with the potential to support significant jobs in the area.

“Aviation will be central to our future growth and plans to build back greener from the pandemic, which is why we have invested over £20 million in the past year to decarbonise the sector in line with our world-leading net zero targets.

“With less than 100 days to go until COP26, we’re ramping up our efforts even further to help companies break ground on trailblazing waste to jet fuel plants and put the UK at the forefront of international SAF production.”

“We’re committed to a sustainable future and to achieving net zero carbon emissions by 2050 and have built a clear roadmap to get us there. In the short-term this means improving our operational efficiency and using carbon offset and removal projects while in the medium to longer term we’re investing in the development of sustainable aviation fuel and looking at how we can help with the growth of zero emissions hydrogen-powered aircraft and carbon capture technology.

“We’re delighted to receive this crucial support from the Government’s Green Fuels, Green Skies competition for all these projects, which is critical in helping us to drive forward the development of sustainable aviation fuel in the UK. These plants would be a game-changer for our industry, not only delivering sustainable aviation fuel, but also creating many hundreds of highly skilled jobs while increasing economic growth around the UK. Our parent company, IAG, was the first European airline group to commit to powering 10 per cent of our flights with sustainable aviation fuel (SAF) by 2030 – purchasing one million tonnes of SAF each year, equivalent to taking a million cars off Europe’s roads every year. These projects are part of our journey to that SAF target and we look forward to pushing them forward.”

You may also be interested in:  Swissport extends ground handling partnership with Fiji Airways its New Zealand

“Velocys has a long-standing relationship with British Airways and together secured the planning consent for Altalto Immingham, the first SAF plant in the UK designed around Velocys’ here and now, technology solution. We welcome this new funding from the UK Government, which follows on from the F4C competition, as it will help bring Altalto closer to the production of Sustainable Aviation Fuel. The Green Fuels, Green Skies initiative highlights the importance of building SAF facilities throughout the country that will help the UK not only to meet the targets set but also to make a quantifiable impact on climate change.”

“These projects are vital to our mission of expanding SAF on a global basis to help decarbonize the aviation industry and progress towards net-zero. At LanzaJet, we’re in a unique position with ready and scaling technology to produce lower-carbon, sustainable fuels. Our partnership with British Airways, Nova Pangaea and others provides novel and important integrated solutions for the UK. Together, we are grateful to the Prime Minister and Department for Transport for their support in advancing the production of sustainable aviation fuel in the UK.”

“In order to deliver the transport decarbonisation plan we need to increase and accelerate investment in technologies that will deliver the net zero mandate. We want the UK to be a world leader in SAF and to do this we have to be ambitious and embrace innovation. We plan to deliver the first UK based end-to-end sustainable value chain from UK wood waste and residues to SAF and are not only proud to partner with British Airways and LanzaJet, but proud that the UK is leading the charge to decarbonise aviation.”

British Airways is a premium global airline and the UK’s flag carrier and has been flying for more than 100 years. The airline connects Britain with the world and the world with Britain, putting customers and sustainability at the heart of its operations and continues to provide excellent service in all aspects of its business.

Launched in June 2020, by carbon recycling company, LanzaTech; LanzaJet, Inc., will produce sustainable aviation fuel (SAF) for a sector requiring climate friendly fuel options as it starts to recover from the impacts of COVID-19. With its approach to commercialization of SAF, LanzaJet is creating regional jobs while enabling global decarbonization of the aviation sector. The LanzaJet process can use any source of sustainable ethanol for jet fuel production, including, but not limited to, ethanol made from recycled pollution, the core application of LanzaTech’s carbon recycling platform. Commercialization of this process, called Alcohol-to-Jet (AtJ) has been years in the making, starting with the partnership between LanzaTech and the U.S Department of Energy’s Pacific Northwest National Laboratory (PNNL). PNNL developed a unique catalytic process to upgrade ethanol to alcohol-to-jet synthetic paraffinic kerosene (ATJ-SPK) which LanzaTech took from the laboratory to pilot scale. The first ATJ plant (38M litres per year) will be located in Soperton Georgia, USA and is planned for start-up in 2022.

You may also be interested in:  Qatar Airways announces expanded strategic codeshare partnership with JetBlue

Nova Pangaea Technologies (NPT) has developed a disruptive patented process technology called REFNOVA. REFNOVA converts woody and agricultural residues into sustainable sugars and biochar that can be further processed into biocarbon’s, biochemicals, biopolymers and drop in for advanced biofuels such as sustainable aviation fuel (SAF). REFNOVA is a decarbonisation enabler and allows its customers to replace fossil-based products with sustainable products sourced from non-food based feedstocks.

Velocys is an international UK-based sustainable fuels technology company. Velocys designed, developed and now licenses proprietary Fischer-Tropsch technology for the generation of clean, low carbon, synthetic drop-in aviation and road transport fuel from residual woody biomass and municipal solid waste. Velocys is at present developing two reference projects: one in Immingham, UK, to produce fuels that significantly reduce both greenhouse gas emissions and key exhaust pollutants for aviation and road transport and one in Natchez, Mississippi, USA (incorporating Carbon Capture, Utilisation and Storage). Originally a spin-out from Oxford University, in 2008 the Company acquired a US company based on complementary reactor technology developed at the Pacific Northwest National Laboratory. Velocys is headquartered in Oxford in the United Kingdom.