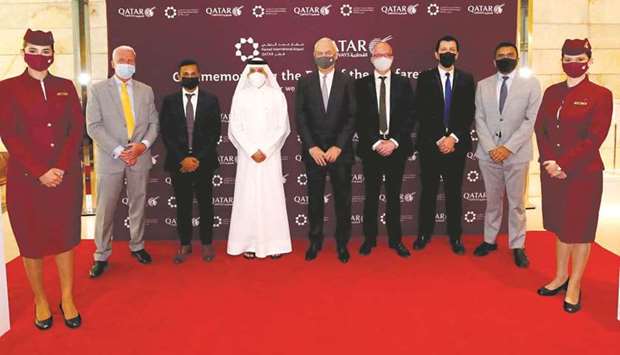 DOHA, Qatar, 2021-Nov-05 — /Travel PR News/ — Qatar Airways has won the ‘Investment in People’ accolade from Seatrade Awards 2021, in recognition of its contribution to the welfare of thousands of seafarers. The airline not only played a leading role in the repatriation of mariners stranded by the pandemic but also continued to facilitate essential crew changes to support the global supply chains.

The Seatrade Awards, known as the “Maritime Oscars”, are judged by an independent panel of experts representing key maritime associations across the world.

Since the start of the pandemic, Qatar Airways has carried more than 500,000 mariners for both repatriations and crew changes. In addition, the airline operated more than 130 charters carrying over 35,000 workers. Also, the airline’s home airport Hamad International Airport (HIA), opened an industry-first dedicated ‘Mariner Lounge’, providing exclusive, complimentary access to seafarers and offshore workers.

Qatar Airways Group Chief Executive, His Excellency Mr. Akbar Al Baker, said: ”We want to express our appreciation to our colleagues and friends in the maritime industry for this important recognition. Throughout the pandemic, we stood shoulder-to-shoulder, keeping the global supply network alive during the most challenging period in recent history. It is our pleasure and privilege to have assisted in safeguarding the welfare of the maritime industry’s most valuable asset, its people.”

The global COVID-19 pandemic has created unprecedented challenges for the aviation industry and, despite this, Qatar Airways never ceased operations and worked diligently to take people home safely and reliably throughout the crisis. The airline has also added new destinations in the past 18 months, including San Francisco and Seattle in the US; Abidjan, Abuja, Accra, Luanda in Africa; Brisbane, and Cebu in Asia Pacific.

In addition to this, Qatar Airways is the first global airline in the world to achieve the prestigious 5-Star COVID-19 Airline Safety Rating by Skytrax. This follows the success of Hamad International Airport (HIA) as the first airport in the Middle East and Asia to be awarded a Skytrax 5-Star COVID-19 Airport Safety Rating. These awards provide assurance to passengers around the world that the airline’s health and safety standards are subject to the highest possible standards of professional, independent scrutiny and assessment.