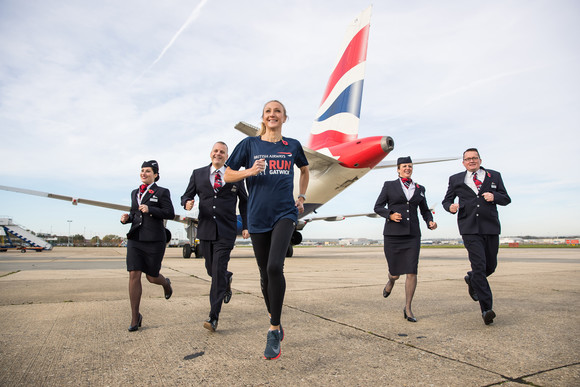 LONDON, UK, 2017-Nov-02 — /Travel PR News/ — British Airways has today announced that it will be headline sponsor of the inaugural Run Gatwick event, an exciting new road race taking place on Sunday May 13, 2018.

Paula said “British Airways Run Gatwick is an exciting new race to hit the UK next year. It’s a great opportunity for seasoned runners and first-time competitors, and the unique location also means it’s also perfect for European runners to fly in to Gatwick to compete.”

The inaugural British Airways Run Gatwick event will support Flying Start, the global charity partnership   between British Airways and Comic Relief. The event will include the International Half Marathon and  5K, plus the Corporate 5K and a family run for children aged four to 15 years. The choice of race distances aims to encourage runners of all ages and abilities to get active and enjoy the experience of a big sporting event. The races will take place on fully-closed routes through the parks, towns and beautiful West Sussex countryside around Gatwick Airport, and the race village will be located in Southgate Park.

The start and finish of all races will also be at Southgate Park, and a total of 7,500 places are available across the various races.

European runners can take advantage of the handy location for the race, with British Airways offering flights to Gatwick airport from a number of European destinations.

The 2018 British Airways Run Gatwick takes place on Sunday 13th May. Early bird entries are now open, costing £32 for the International Half Marathon and £22 for the 5K. Entry for the Family Run (one adult plus one child aged 4-15 years) costs £12 for children aged 4-15 years and £1 for accompanying adults.

Go to www.rungatwick.com for further details and to sign up.

For further information or images, please contact the British Airways press office on 0208 738 5100 or email press.office@ba.com