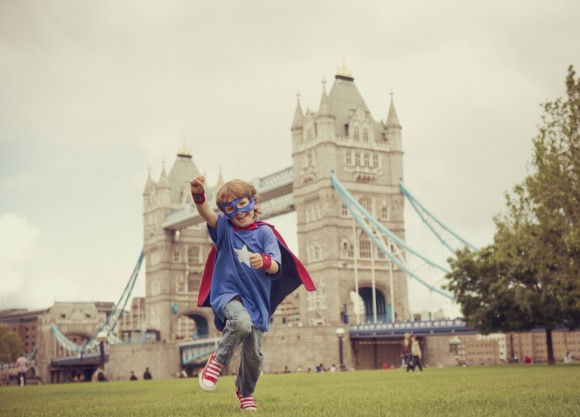 London, 2017-Jul-13 — /Travel PR News/ — The school holidays are nearing and its ‘books away’ for the majority of British children but should they spend the summer swotting up on their geography?

In a recent poll – to celebrate kids flying for free with British Airways this summer – eight to 16 year olds failed to identify the biggest UK cities on a map.

This summer the airline is offering free flights for children under 12 who travel with a full paying adult on journeys between Heathrow and Leeds, Newcastle, Edinburgh, Inverness, Belfast and the home of LEGO; Billund in Denmark.

The study, which asked 1,000 adults and 1,000 children living across the UK to locate cities and landmarks around the country, found that nearly a third (30 per cent) of children could not pin point the capital on a map.

Nearly two thirds (64 per cent) did not know where Birmingham was, with 57 per cent of 14 to 16 year olds failing to identify the midland city.

It was a similar failing for those from the West Country with 4 out of 10 Bristolians unable to pick out their home city. Contrastingly, 77 per cent of Liverpudlian’s correctly identified their hometown on a map of the British Isles.

Worryingly, 71 per cent of youngsters from London and the Home Counties didn’t know where Leeds was, 62 per cent couldn’t work out where Newcastle was and more than half (54 per cent) failed to locate Manchester.

Across the country, nearly one in five youngsters could not point to Wales on a map, five per cent were confused where England was, 14 per cent failed to correctly identify Northern Ireland and one in 10 (9 per cent) couldn’t point out Scotland.

Perhaps surprisingly, the most identified place on the entire map was Jersey, with 89 per cent of those polled correctly pointing out the picture-perfect island.

Unsurprisingly, as one of the most visited capitals in the world, 82 per cent of youngsters polled had visited London and impressively two thirds (64 per cent) could identify Big Ben, while more than half (51 per cent) could point out Tower Bridge and 93 per cent knew The Queen resided at Buckingham Palace.

When shown pictures of iconic landmarks only 30 per cent of children knew the Angel of the North was located in Newcastle and 20 per cent couldn’t locate the county the Eden project was in. One in ten (nine per cent) thought John O’Groats was one of the Hairy Bikers and 15 per cent believed the geographical landmark of Cheddar Gorge was a strong cheese.

Britons fared better in history however, with almost all youngsters (90 per cent) able to pin point pre-historic Stonehenge on the map.

Nearly four out of five parents (79 per cent) polled said they were ‘definitely’ or ‘probably’ going on holiday this year.  A significant 7 out of 10 said they wished their children could see more of the UK and its landmarks, but 71 per cent said money was the main thing stopping them from showing their children more of their home nation.

Adam Daniels, British Airways’ chief commercial officer, said: “Saving every penny counts when it comes to family holidays so flying kids for free will make it cheaper to fly away for fun and see more of the UK this summer.

“With so many fantastic tourist attractions and activities for kids across Britain, the offer also looks set to give UK tourism a boost by encouraging families to visit London, the North, Scotland and Northern Ireland for their holidays.”

Malcolm Roughead, VisitScotland Chief Executive, said: “Whether its hunting for Nessie in the Highlands or soaking up the excitement of the Edinburgh Festival, there are plenty of enthralling events and outstanding attractions to make a family trip to Scotland an unforgettable experience.  In the current economic climate, many parents are looking for cost effective ways in which to make holiday memories that will last a lifetime. This fantastic new offer from British Airways will make it easier for families to visit some of our most beautiful cities and landscapes and explore everything they have to offer.“

The partnership means up to two children can fly for free when travelling with an adult even during the school holidays. It can be used on Euro Traveller tickets booked until October 1 for travel until October 31, 2017.

Thousands of parents have already claimed the offer with the most popular route being Belfast, followed by Edinburgh, then Newcastle. Find out more and book online at ba.com/kids-fly-free.

Notes to editors:
Helping to cut holiday costs even further, there are also plenty of family-friendly offers to save customers even more money on the way, with kids-eat-free deals at participating restaurants at Heathrow Terminal 5, complimentary travel for youngsters on the Heathrow Express and kids stay free offers at selected Hilton Hotels.
• Return adult hand baggage only economy fares on British Airways flights from June to November, between Heathrow and the following airports start from:
£87 – Belfast
£80 – Inverness
£88 – Leeds
£83 – Newcastle
£79 – Edinburgh
£73 – Billund
• Kids fly free applies to children who are under 12 at the start of the journey
• Kids must be accompanied by an adult, and up to two kids can fly for free with each fare paying adult
• The offer runs from June 1, 2017 to October 31, 2017
• All seats are subject to availability
• The offer is valid on one-way and return tickets from London Heathrow (LHR) to/from Leeds Bradford (LBA), Newcastle (NCL), Edinburgh (EDI), Inverness (INV), Belfast (BHD) and Billund (BLL), Denmark.
• Flights must be booked between 13:00 May 10, 2017 and 23:59 September 30, 2017 and travel must be taken between June 1, 2017 and October 31, 2017. Blackout periods apply on some destinations.