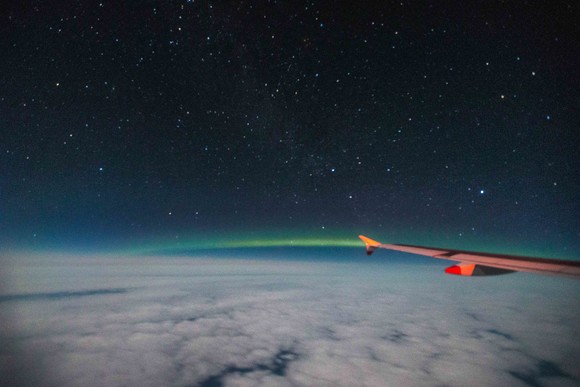 The British astronaut joined 142 lucky stargazers on the Aerobility Aurora flight that took off from Gatwick and headed North to take in the natural light display.

Starwatchers started the day at Gatwick airport, where they heard from Aurora expert and BBC The Sky At Night presenter Pete Lawrence before enjoying a special guest lecture from Tim Peake. At sunset they boarded the A320 aircraft and headed to 61 degrees North to the coast of the Shetland Isles, in the hope of witnessing the celestial spectacle.

As customers prepared for the evening’s events and adjusted their eyes to the night sky, Pete Lawrence entertained those on board with a running commentary over the PA system throughout the flight, pointing out star constellations as well as the glowing light formation visible through the aircraft windows.

Aerobility is a charity that gives people with a disability the chance to fly, and all proceeds from the evening will be used to support aviation based opportunities for disabled young people, disabled adults and wounded soldiers. In attendance was Mike Miller-Smith MBE, CEO of the charity, British Airways senior first officer and Aerobility Chairman Shona Bowman and first officer and Aerobility Trustee Andy Robins.

Captain Ian Mills, who operated the flight, said: “To be able to view the Northern Lights while supporting such a great charity is a great experience. British Airways is incredibly proud to be able to support this special charter flight and we are delighted that we’ve played a part in helping raise money for a fantastic cause.”

Mike Miller-Smith MBE, CEO of Aerobility, said: “The Aerobility Aurora flight required a huge amount of hard work and planning, and with the help of British Airways, tonight has been a great success. Aerobility supporters and the British Airways crew have been fantastic.”

In 2012 Mike delivered a speech at a British Airways pilot forum about passengers with reduced mobility and had a profound impact on many of the attendees. From here, his involvement with the airline grew and in 2013 British Airways recognised Aerobility as one of its supported charities. The airline donates tickets and flight simulator experiences to help people with a disability experience the magic of flying.