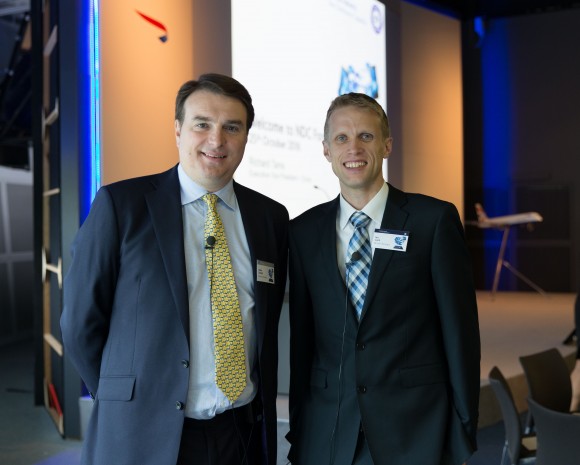 The event was organised as part of the airline’s commitment to drive awareness and discussion around NDC, the standard set up by IATA to enable the travel industry to communicate in the same language, drive revenue and better understand the products available to the traveller.

Adam Daniels British Airways’ chief commercial officer opened the day, welcoming the attendees and setting the scene. Other British Airways speakers included Ian Luck, head of distribution who detailed how the airline is approaching NDC and Nicola Ping, distribution development manager who talked about the detail and technical application of NDC.

The concept of NDC, how it works and its benefits were laid out by IATA’s director, Yanik Hoyles.

Moshe Rafiah, the CEO of Travelfusion, which yesterday announced that it was to become the first IT service provider to launch a site following British Airways opening up its data to IT developers, talked through how the site would work and the benefits it would bring travel partners.

The GDSs were represented by Sabre’s UK&I country director, Eric Hallerberg and Melanie Forbes, director, product and marketing suite for Travelport, both of whom talked about the work the GDSs were doing to integrate NDC in to their companies and the work ahead of them.

Frank Skivington from Skyscanner, which was the first travel meta-search engine to sell British Airways flights with detailed information around elements such as cabin details and baggage allowance thanks to NDC, talked about the success of their work, while Werner Kunz from Fareportal covered the opportunities that NDC can bring to the online travel market.

Bill Brindle, CIO from Hogg Robinson Group discussed how NDC can work alongside a multi-channel environment and emphasised how robust and reliable future distribution systems need to be in order to be adopted by large corporate customers.

The day was closed with a question and answer session with British Airways’ head of global sales, Stephen Humphreys.

On the event, Adam Daniels, British Airways’ chief commercial officer, said: “We really believe that NDC is a game-changer and we think it’s critical that open discussions are had across the industry. Our distribution and sales teams have been out and engaging with as many travel experts as possible, seeking their views and developing our approach to NDC with that feedback in mind. We feel that there is far more engagement, understanding and excitement about NDC now and what it can deliver for all our businesses, and the conference reinforced that.

“The speakers gave important insights in to how NDC works for their businesses and how they see it evolving. It is still in its infancy but the great thing is that it can be adopted and adapted by each individual business to suit their model.

“The questions we received from the delegates were thought-provoking and helped to generate great discussions around the future of NDC, what works and what needs more development. We’ve already had positive anecdotal feedback on the conference and it’s been great for us all to meet one another and have open and direct conversations, which we hope will be of real benefit to everyone who attended.”