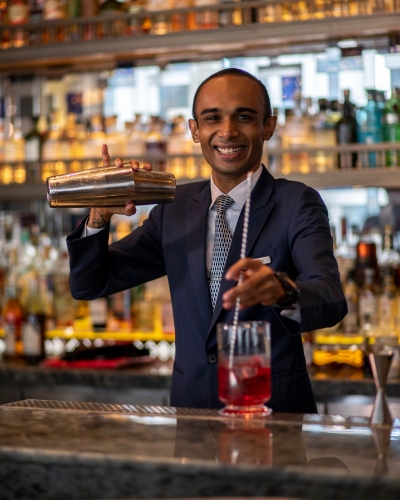 Head Bartender Shawn is set to build on the bar’s award-winning legacy, adeptly supported by Assistant Bar Manager Julian who has been an integral part of the team since preopening

With this dynamic duo at the helm, there will be plenty to discover at Bar Trigona in the coming months, including a fresh menu inspired by local produce and lively guest bartender takeovers. Also on the cards: an uptick in energy and playfulness, led by Shawn’s love for shaken cocktails and Julian’s passion for interacting with guests.

A member of the Bar Trigona team since 2018, Shawn has been an integral part of its dazzling journey from local favourite to global trailblazer. He first came on board as Bar Supervisor, working his way up to Assistant Bar Manager and now taking the reins as Head Bartender. “I’m thrilled to take up the mantle from Ashish Sharma,” he says enthusiastically. “Leading the team here is my passion, my dream, my goal.”

With a zest for experimenting with local produce and making the most of every single ingredient, Shawn is keen to build further on Bar Trigona’s approach of sustainability and innovation. “We will continue to redefine luxury beverages by showcasing the best of Malaysian farms and gardens,” he notes, adding that true sustainability goes far beyond simply eliminating single-use plastic. “We have to look at the entire lifecycle. What can we reuse, recycle, repurpose? I hope guests will join us as we explore different ways to help protect our planet.”

Born in Selangor, Malaysia, young Shawn initially planned to become an architect. All that changed when, at the age of 17, he got a part-time job at TGI Fridays. “Until then, I was quite shy and reserved,” he smiles. “But interacting with guests was so much fun! I loved engaging with new personalities, new flavours, new ideas. I knew this was where I belonged.”

After completing his diploma in Hotel & Restaurant Service from Singapore, Shawn began his career at the Gallery Hotel Singapore. He then honed his skills as a Bartender at Mandarin Oriental Singapore, followed by a move back to Kuala Lumpur with the same brand. After a successful stint at another five-star hotel bar in the city, he joined the Four Seasons family.

“Working at Bar Trigona was a game-changer for me,” he shares frankly. “This is where I really learned the craft of cocktail-making, the art of creating my own signature drinks. Now I’m excited to take things to the next level, with the support of my incredible team.”

Hospitality is second nature to Julian – “you could say it’s in my genes,” he says with a laugh. “My mum worked in the hotel industry, so I grew up in this world. By the age of five, I already had a hundred hotel nights under my belt!”

This early exposure gave Julian a valuable understanding of guest service, ultimately inspiring him to build a career in hotels. After earning an advanced diploma in hospitality management, he honed his skills at multiple luxury hotels in Kuala Lumpur, rapidly moving up the ladder to bar service leader and then team leader. In 2018, he joined the preopening team of Four Seasons Hotel Kuala Lumpur as Assistant Bar Manager, a role he has essayed with skill and flair ever since.

Why bars and not restaurants? “There are fewer protocols because people come here to unwind and have fun,” he explains. “Bar Trigona has a stylish yet authentic vibe, so I can be who I am.” Indeed, unlike traditional hotel bars, the ambience here is effortlessly relaxed, inviting guests to open up and be themselves. Keep an eye out for Julian on the next visit: he’s the one with the warm smile and chic ponytail, always ready to strike up a conversation or share a joke.

For Julian and his team, the Golden Rule is a daily motto: to treat others as you want to be treated. “Everyone who walks through our doors is met with a warm welcome and treated with genuine care. That’s who we are,” he says proudly.

A Story of Sustainability

The story of Bar Trigona is woven around its muse: the trigona honeybee. Native to Malaysia, these tiny, stingless bees produce a honey prized for its sweet and sour notes. The team sources its artisanal honey from a farm in Negeri Sembilan, a partnership that has flowered into a hive of eco-friendly initiatives over time. “Guests can even adopt their own beehive at the farm,” remarks Shawn.

Besides honey, homegrown ingredients such as cacao and figs are woven through the menu. “For us, a big part of sustainability means working with local communities,” explains Julian, noting that Bar Trigona’s hyperlocal approach is founded on long-standing partnerships with Malaysian farmers.

The team’s latest noteworthy project is Tree-volution, an ambitious reforestation initiative that is planting fruit trees around Malaysian farms. Proceeds from selected cocktails fund seed collection, planting and protection of the fledgling forest. Alongside with providing employment, the goal is to refortify the soil and restore biodiversity. Bar Trigona is also setting up its very own herb farm in collaboration with a long-time partner.

Celebrated by patrons and industry alike, Bar Trigona claimed a coveted spot among The World’s 50 Best Bars 2020, making it the first-ever bar in the country to receive this recognition. It was also named 12th Best Bar in Asia by Asia’s 50 Best Bars 2021.