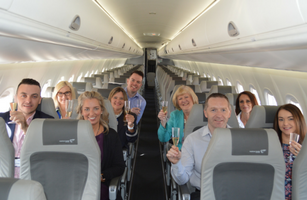 However, it is the unique configuration of the cabin that has really caught the attention of passengers locally.

With just 72 seats on board, which is less than the traditional configuration of a Q400 aircraft, there is significantly more legroom for passengers.

The noise reduction technology also makes for a comfortable, quiet, relaxing journey on board the aircraft.

“The route started on June of this year and is so far proving really popular with passengers. With such an extensive network of onward connections through Icelandair, the route is heavily used by those visiting destinations such as Canada and North America, as well as those visiting Reykjavik itself and other destinations in Iceland.

“With competitive pricing, the route allows passengers to stopover in Iceland for up to seven nights at no additional air fare which is a really appealing benefit for passengers.

“The product itself is really interesting and once which has been designed entirely with the passenger’s comfort in mind. From additional legroom and extra spacious overhead locker storage to the iPads presented to every passenger upon boarding, it makes for a very unique travel experience.”

“Belfast is a vibrant fast growing city with great business and leisure opportunities and we are happy to be able to offer our customers this exciting addition to our network. Like our code-share operation with Air Iceland to Aberdeen, our Belfast route will be flown in cooperation with our sister company, utilizing their smaller aircraft like the Q400 to create new markets and opportunities.”

Doreen McKenzie was the lucky winner of a pair of flights to Reykjavik, courtesy of Icelandair.

Flights can be booked directly at www.icelandair.co.uk