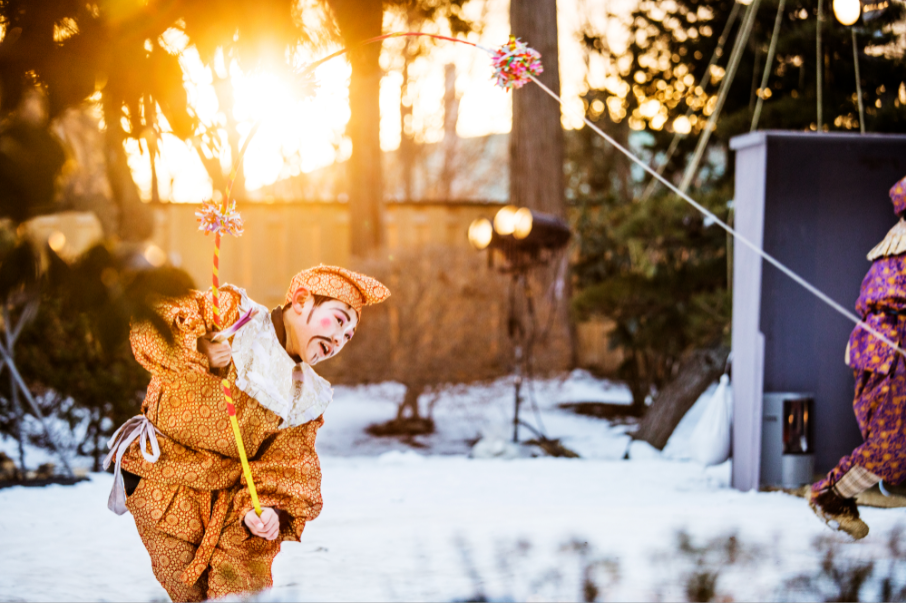 LONDON, 2020-Dec-11 — /Travel PR News/ — During the winter months Hachinohe encourages visitors to enjoy a spectacle of winter events and activities. From skiing throughout the winter months to setting sight on magical winter illuminations to enjoying the Enburi Festival in February. Visitors can expect excellent dry powder snow on the slopes for skiers and snowboarders to enjoy due to the copious amounts of snowfall throughout Aomori Prefecture, as it is the northernmost tip of Honshu. Hachinohe boasts breathtaking winter vistas, snow festivals, hot springs, ski resorts and heart-warmingly delicious local cuisine making for a diverse and worthwhile visit to the region in winter. Here, we take a look at winter in Hachinohe.

Kushi-mochi is a great local treat found in the Hachinohe Area. In most contexts, mochi refers to ‘glutinous rice cakes’. However, much to the surprise of first-time visitors to the area, kushi-mochi is not made from rice but from wheat. To make these treats, a dough of water and flour is formed into round, flat patties and skewered on chopsticks. They are then grilled over charcoal, creating a slightly smoky flavour and aroma, and are finally covered with a sweet paste usually made from miso or wild sesame. These delicious hot discs are sure to warm the body up on the first bite, making them particularly great street food for the winter. One of the best places to eat kushi-mochi is at the Tatehana Sunday Morning Market which runs from mid-March to the end of December.

Night illuminations are common attractions found all over Japan during the winter months, and the Hachinohe Area is no different. During December, and through into February, many different places throughout the area are illuminated every night with seasonal winter lights, creating a beautiful and romantic atmosphere. A main spectacle is the illuminated ice falls of Oirase Gorge, which is located just an hour and 20 minutes from the Hachinohe Region. This gorge is one of the most beautiful river valleys in Japan, with vibrant and fast flowing waters that freeze over during the winter months. Visitors to the Oirase Gorge can gaze at rare ice falls and witness the beauty of icicles and frozen streams, all of which have been carefully lit with LED lamps that don’t melt the ice. During the winter months, Hoshino Resorts Oirase Keiryu Hotel, located alongside Oirase Gorge, runs night tours for visitors to view the spectacle of the frozen waterfalls.

Located in Tako-cho, Soyumura 229 Ski Land is the southernmost ski resort in Aomori Prefecture, northern Honshu. Whilst visiting Hachinohe City, visitors can travel just over an hour to the Soyumura 229 Ski Land, offering an abundance of snow to enjoy. There are plenty of slopes here for both beginner and advanced skiers alike. The slopes are family friendly making it the perfect place for first time skiers and those travelling with kids. For those who don’t ski there is still plenty to do, 229 Ski Land Snow Festa is a fantastic event that can be enjoyed by children and adults. Family activities include hunting for treasures in the snowy mountains, making snow lanterns, taking part in dual-ski/snowboard races (for those that ski) and more. The resort even holds a spectacular fireworks display in the evenings for visitors to marvel at.

Sip some sake in January

The Hachinohe Area is lucky enough to have five separate sake breweries within its bounds. The Hachinohe Shuzo Sake Brewery and the Hachinohe Shurui Sake Brewery are located right in Hachinohe City itself.  The history, brewing style, and products of these breweries are all quite unique, making it well worth the effort to tour and taste each. It is recommended to tour a sake brewery during January because winter is the traditional season for brewing sake in Japan. This means that visitors can try lots of new sake that is fresh off the line or, on some occasions, see the sake itself bubbling away in its fermentation vat.

Hachinohe Enburi is a stunningly beautiful winter festival with a history of over 800 years, that takes place every year from 17 to 20 February at various locations in the city of Hachinohe. The festival features a series of dancers (tayu) who perform a unique style of dancing down the streets in Hachinohe. Each dancer holds a farming tool called ‘enburi’ and wears a hat shaped like the head of a horse and dances while moving the head. Traditional folk dances are performed to announce the end of northern Japan’s long winter and to pray for a successful planting and harvest season, and to usher in the coming of spring season.

Hachinohe’s famous Bouillabaisse Festival is a two-month long celebration of the port town’s best seafood that is run during the winter months from 1 February – 31 March each year. The Hachinohe Bouillabaisse Festival is one of the biggest events in the Aomori Prefecture. Visitors can sample quirky and unusual fish dishes that the local participating restaurants develop to whet visitors’ appetites.  During the event, various restaurants and hotels design their own unique versions of the classic French dish. Restaurants that serve at the festival must abide by strict standards; firstly they must ensure that they are using at least four types of seafood that are caught off the coast of Hachinohe and secondly, they must make sure to serve another dish that makes use of the leftovers as a soup. Each restaurant must prepare a signature dish that utilises the soup in an original way to create a second, subsidiary dish.