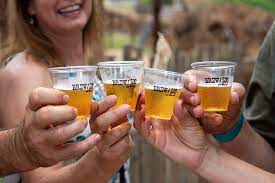 Zoo Atlanta: Brew at the Zoo returns on Memorial Day weekend, Saturday, May 28, 2022

WHAT: Memorial Day weekend’s one-of-a-kind festival favorite returns at Brew at the Zoo on Saturday, May 28, 2022. The 21-and-up event will feature sampling of more than 70 beers and wines, with a wide variety of craft options from many of Georgia’s favorite breweries and cideries. Other highlights will include music at venues throughout the Zoo; wildlife viewing until dusk; special Keeper Talks; and more.

The 2022 music lineup will bring tunes with all sounds and styles, from hip hop, RnB, pop, blues and soul to alternative rock, classic rock, and country. Featured acts include No Diggity, After School Special, Kenneth Kelly, and Robbie Litt. As an added bonus, Brew-goers will also have the opportunity to experience Sean Kenney’s Nature POP! Made with LEGO Bricks. Produced by Imagine Exhibitions and featuring more than 40 sculptures crafted exclusively with over 800,000 LEGO pieces, the limited-time exhibition will be open at Zoo Atlanta from May 13 through August 8.

Now through May 27, tickets are $50 for Zoo Atlanta Members; $55 for non-Members. VIP tickets are available at $115 and include early admission to the event at 5 p.m.; access to an air-conditioned VIP lounge and private restrooms in the Michael & Thalia Carlos Ballroom in Savanna Hall; premium beer and wine selections; a VIP-only spirit tasting; and one commemorative Brew at the Zoo T-shirt per ticketholder. If the event has not sold out, day-of tickets will be $60 for Zoo Atlanta Members; $65 for non-Members; $130 for VIP.

An Atlanta tradition for more than a decade, Brew at the Zoo has a history of selling out, and capacity is limited. Get tickets now at zooatlanta.org/brew.

Signature events such as Brew at the Zoo benefit Zoo Atlanta operations that support conservation programs and partnerships around the world. Learn more at zooatlanta.org/conservation.

Brew at the Zoo is open to guests ages 21 and up only; guests under 21 will not be admitted.

ABOUT: About Zoo Atlanta

A proud accredited member of the Association of Zoos and Aquariums (AZA), the gold standard for animal care and welfare, Zoo Atlanta has a mission to save wildlife and their habitats through conservation, research, education, and engaging experiences. The Zoo is home to more than 1,000 animals representing more than 200 species from around the world, many of them endangered or critically endangered. Highlights include giant pandas, including Ya Lun and Xi Lun, the only giant panda twins in the U.S.; one of North America’s largest zoological populations of great apes; and a global center of excellence for the care and study of reptiles and amphibians. Recent transformations include the African Savanna, featuring new and expanded habitats for African elephants, giraffes, zebras, ostriches, warthogs, meerkats, and rhinos; Savanna Hall, a state-of-the-art special event destination in the newly restored historic former home of the Atlanta Cyclorama; and the new Arthur M. Blank Family Foundation Plaza. For more information, visit zooatlanta.org.