BUDAPEST, HUNGARY, 2016-Jun-23 — /Travel PR News/ — Wizz Air, the largest low-cost airline in Central and Eastern Europe, announced today that WIZZ pilots will provide score updates of half-time and full-time of the football matches that are held at the times of the flights. The information will be sent to the pilots from the airline’s operations control center at its Budapest office, via Aircraft Communications Addressing and Reporting System (ACARS) messages ensuring that the latest results are able to reach even those football enthusiasts who are flying at 38,000 feet.

The passengers will be advised that the latest football score update is about to follow, so if they wish not to know the real time standing and watch the recording of the game later, they will have an opportunity to prepare for the spoiler alert.

Wizz Air operates flights from 19 countries out of the 24 that are currently participating in the competition, and has base operations in five of them. The importance of team spirit and unity is well known for the airline and, where possible, WIZZ is supporting football enthusiasts with special flights that bring the fans to the destinations in France in time to see their team play and take them home after the match. Wizz Air is also the chosen airline of the Hungarian National Team that travels on the brand new WIZZ Airbus A320 aircraft between the match locations in France.

Tamara Vallois, Head of Communications of Wizz Air said: “Our customers who carefully follow the results of the championship don’t need to compromise on their travel schedules. Live score updates made by our pilots ensure that our passengers know the latest results even flying at 38,000 feet. Whether you are flying with WIZZ for business, summer holiday, or to watch your favorite team play in France, you will get the latest information on the scores of the matches even in flight.” 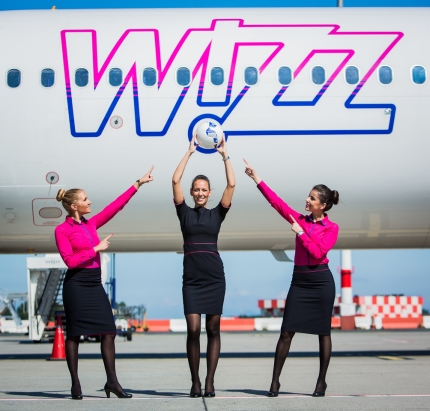