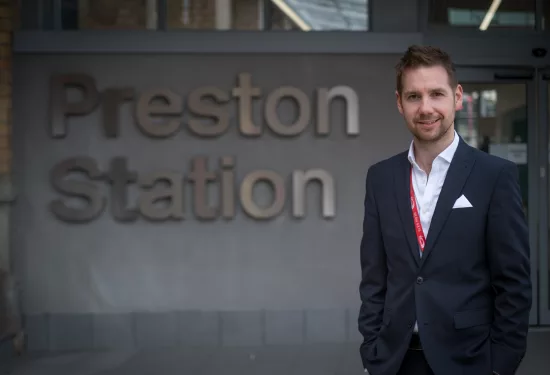 London, UK, 2017-Jun-28 — /Travel PR News/ — A new entrance at Preston station is now open, marking the completion of Virgin Trains’ £2m investment designed to enhance the experience for ever-growing customer numbers at Preston. Passengers travelling to or from Preston station can also now take advantage of free high-speed Wi-Fi on the concourse and platforms, as well as new retail outlets including Starbucks and West Cornwall Pasty Co.

The refurbishment, which has taken place over two years, is the result of a £2m investment by Virgin Trains. Over 1.2m passengers have travelled on Virgin services between London and Preston during the last two years meaning the station is welcoming record numbers of people as Virgin Trains celebrates twenty years of running trains on the West Coast Main Line.

In December 2016, the station’s Bike Hub was officially opened, following £500,000 of investment to transform facilities for cyclists. With space for up to 200 cycles, it is the largest of its kind on the West Coast Main Line and features a specialist cycling shop, managed by Leisure Lakes Bikes – a local family-run business.

In addition to investing in new station facilities, Virgin Trains has introduced m-tickets across all routes along the west coast, an extended booking horizon to six months and launched its industry-first on-board entertainment portal, BEAM – all while making improvements to punctuality reaching a record 90.9% on the Anglo Scot route, which serves Preston.

Michael Stewart, newly appointed General Manager at Virgin Trains on the west coast for Anglo-Scottish services, said: “As we celebrate our twentieth year we continue to put our customers at the heart of everything we do. Our investment at Preston station is a great example of this. Each phase of investment has been designed to enhance the experience for customers using the station and accommodate the growth we’re seeing in passenger numbers. We’re proud that the £2m investment has now been completed, and we’d like to thank Network Rail, Lancashire County Council and Preston City Council for their support. We hope customers using the station will benefit from these changes for many years to come.”

County Councillor Michael Green, Cabinet Member for Economic Development and Planning, said: “Over two million passengers use Preston railway station each year, making it a critical transport asset and important gateway for Lancashire and for people further afield. These changes will undoubtedly improve the experience for passengers, enhancing the station’s presence within the city centre and its relationship to a range of proposed commercial and residential developments including the £200m UCLan campus redevelopment, City Centre Living and the leisure-led transformation of the Harris Quarter. Key sectors of the Lancashire economy require better transport connections to continue prospering, including tourism, aerospace, the energy sector, and higher education; while other key industries rely on rail capacity for freight services. We want Preston to have a modern, 21st century facility and Virgin Trains’ investment in the station is welcome.”

On the East Coast route, £140m is being invested to create a more personalised travel experience. We have already invested £21m to completely revamp our existing fleet and customers can now benefit from 42 additional services (22,000 extra seats) per week between Edinburgh and London. 2018 will see the introduction of completely new Azuma trains being built in the UK by Hitachi.