United Airlines and JetBlue Airways are the first to make the move from the old counters built in the late 1980s to the new, modern ticket counters that will transform the passenger check-in experience.

Passengers can now find JetBlue and United check-in at the east end of the ticketing hall, across from the temporary Delta space. The new ticketing area features overhead monitors with airline and flight information, low-rise quartz countertops that are more easily accessible to those in wheelchairs, blade lighting and expansive windows for a brighter look, and construction details tied to Charleston history and architecture.

The Ticketing Hall renovation is happening in phases as part of the $189 million Terminal Redevelopment and Improvement Program (TRIP).

“Over the next year, the remaining airline ticket counters will be demolished and rebuilt as part of the terminal transformation from a dark, 1980s brick structure to a bright, modern facility that mirrors the vibrancy, charm and elegance of Charleston and the Lowcountry,” said Paul Campbell, director of airports.

Work will begin soon to renovate the old United and JetBlue ticket counters. When completed in the spring, American Airlines and US Airways will moved into new space, followed by Southwest in July 2015 and Delta in September 2015.  The consolidated TSA security screening checkpoint, with access from the Ticketing Hall, is slated to open in the spring of 2015.

You may also be interested in:  Shannon Airport applauds United Airlines' return next year with 88% more capacity on Chicago service

“Our move to a brand new ticket counter means an even better experience for the thousands of customers we serve each month in the beautiful city of Charleston,” said Chris Plunkett, JetBlue’s general manager at Charleston International. ”Since our arrival in 2013, we’ve received such a warm welcome from the people of Charleston and from our airport partners. JetBlue is thrilled to be part of the growth in Charleston, as we continue to serve this wonderful community.”

Many of the key design features of the new airline ticket counters draw from local history and architecture, in particular the Charleston Single House – so named because it is a single room wide on the streetscape – and the lush gardens just off the piazzas (that’s porches for you folks from ‘off’).  Coupled with the natural light from 16-foot-high windows both on the front curb and on the airfield side of the terminal, the materials and colors borrowed from the palette of the Lowcountry make the area shine.

The ceiling panels are intended to mimic the “haint” blue ceilings often found on the porch ceilings of a Charleston Single House. Dating to the 1800s and the Gullah culture of African slaves, it is believed that blue porch ceilings would draw evil spirits away from the home and into the sky.

The trellis work hanging over the ticket counters is reminiscent of those used in Charleston’s Historic District gardens to create intimate charm and elegance outdoors. They are painted Charleston Green, a classic Southern paint color that is so deep it is often mistaken as the color black.

You may also be interested in:  Chicago Department of Aviation: United Airlines to begin Chicago's first-ever flights to Edinburgh, Scotland this summer-season

“Opening the first new ticket counters is an exciting milestone for the project,” said John Connell, deputy director of airports for facilities. “We think passengers will be pleased with what’s still to come in ticketing and throughout the airport.”

TRIP construction began in 2012. Completion is scheduled for the fall of 2015.  Much has already been completed, including a new Central Energy Plant and Rental Car Pavilion. In the end there will be five new airline gates (bringing the total to 15), a modernized baggage handling system, consolidated security screening checkpoint and a variety of new retail stores, pubs and restaurants for passengers to enjoy. 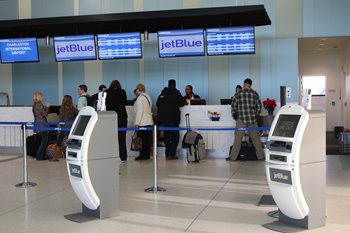