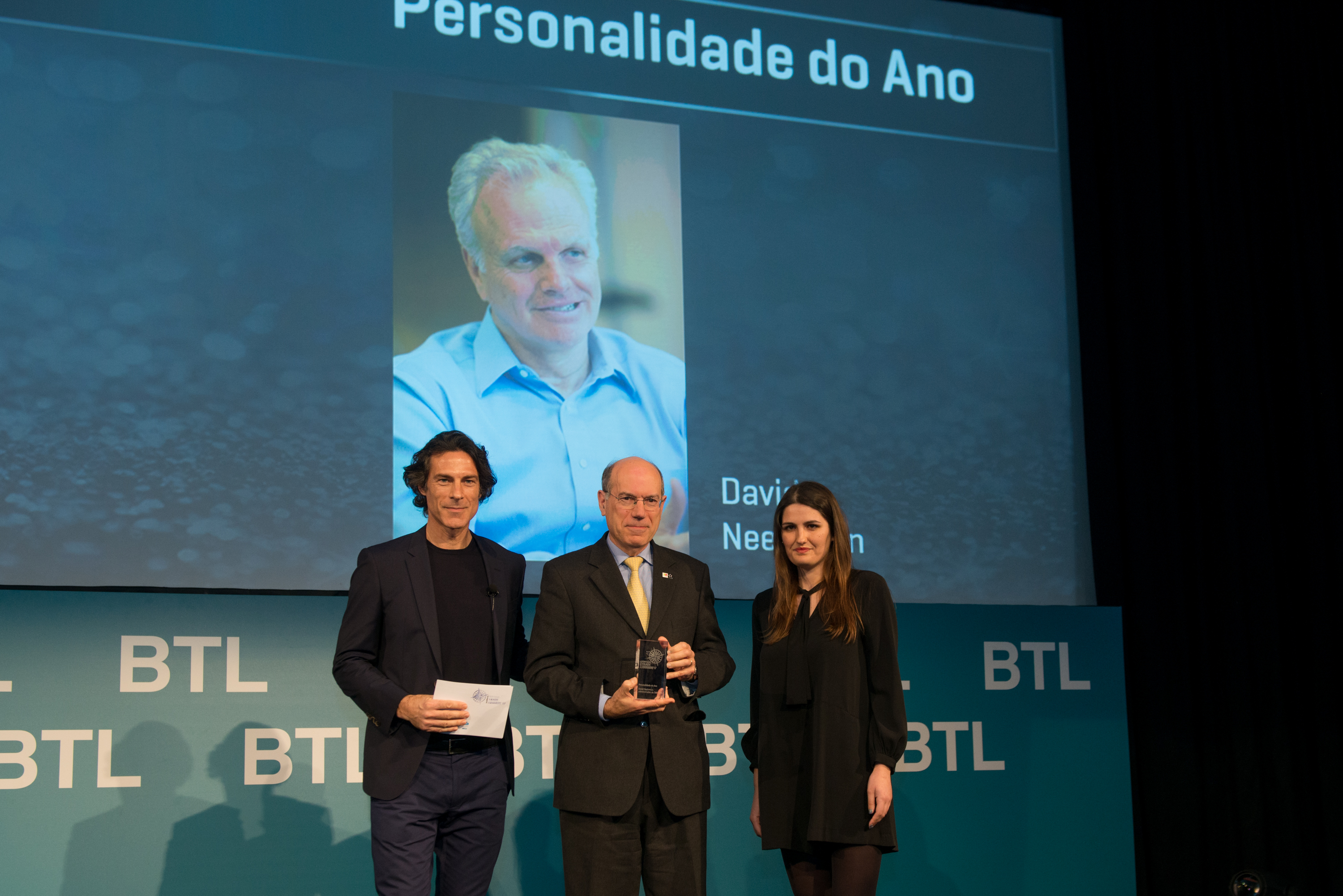 Photo: Fernando Pinto, with Paulo Pires, host of the ceremony, and Carina Monteiro, Publituris Director, awarded in the name of David Neeleman.

Lisbon, Portugal, 2017-Mar-20 — /Travel PR News/ — TAP shareholder David Neeleman has received the Personality of the Year Award at the opening of the Lisbon Tourism Fair (BTL) in the FIL exhibition centre.

The prize awarded by Portuguese newspaper Publituris also highlights TAP’s contribution to the growth of tourism, on the opening day of the leading fair in the sector to which TAP attended, with a vanguard stand introducing the national airline’s most recent innovations.

Mr. Neeleman could not attend the ceremony and therefore Fernando Pinto, the airline’s CEO, received the award on his behalf. In a video, David Neeleman claimed it was “a great honour” to be nominated “Personality of the Year” in the area of tourism, an award he accepted on behalf of all TAP’s employees. “They are all doing a wonderful job transforming our Airline into a world leading company”, he said.

Carina Monteiro, director of Publituris, has stated that the award for Mr. Neeleman was the result of a year “of intense activity and change for TAP, which has also been decisive for tourist activity in Portugal, both by improving existing routes and by opening up to new markets. You cannot think about tourism in Portugal without thinking about TAP” and, as Mr. Neeleman often says, “TAP must be Portuguese tourism’s most important partner.”

Describing itself as one of Portugal’s most important ambassadors in the world, TAP is present at this year’s BTL with a 230 square meters stand that focuses on the company’s innovations. Using virtual reality technology, the public can walk through the Airspace cabin of the new A330neo aircraft that TAP will be the first in the world to operate. The Portugal Stopover Programme will also feature at this BTL. TAP will organise a contest offering Stopover experiences. The Airline’s new routes will also feature on a new TAP LCD interactive map which will also show the aircraft type, services, and 360º photos or videos of the destinations selected by visitors.

During the afternoon, also at TAP’s stand, the Airline’s CEO, Fernando Pinto, will take part in an event commemorating the 50th anniversary of the Lisbon-Recife route, operated in partnership between TAP and EMPETUR (Pernambuco Tourism Board). With its strategic hub in Lisbon, TAP is helping to promote Pernambuco as a tourist destination of choice for Europeans. At the end of February this year, the number of flights to Recife booked to fly between April and October had increased by 144% on the year before. The number of flights to Recife will increase this summer with one additional flight per week between Lisbon and the capital of Pernambuco.

BTL opens its doors to tourism professionals today and will be open, to the public from 6pm on Friday to 8pm on Sunday. The organisers expect 75,000 visitors in this edition of BTL, where 1,200 companies will be present and 3,000 international meetings will take place.

As TAP, Publituris is proud to be associated with BTL, promoting the best companies in the sector. The Publituris Portugal Trade Awards seek to honour the more technical areas of tourism as well as name the Personality of the Tear, which is awarded directly by the Publituris team.