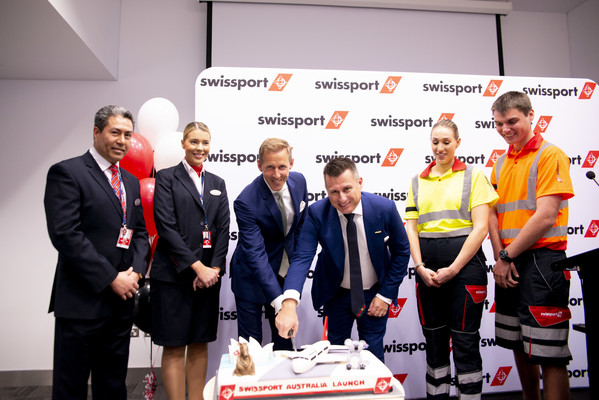 Opfikon, Switzerland, 2018-Jul-20 — /Travel PR News/ — Process integration of Aerocare into the Swissport network is in full swing. The global leader in Airport Ground Services and Air Cargo Handling kicks off the re-branding of its operation in Australia and New Zealand at Sydney Airport. The conversion of all locations and all Aerocare Ground Service Equipment is planned to be completed by the end of 2018.

Swissport International is successfully pushing ahead with the integration of the Aerocare organization in Australia and New Zealand. Following the acquisition in March 2018, the registered company name was changed to Swissport Australia as confirmed by the Australian Securities and Investments Commission. Today, Eric Born, Group President & CEO of Swissport International, and Joe Phelan, Group Chief Operations Officer, unveiled the new Swissport branding to staff, customers and partners at Sydney Airport.

“Today, the integration of Aerocare into Swissport’s global network is becoming visible in Australia and New Zealand”, says Eric Born on the occasion of the re-branding at Sydney Airport. “Together with the Aerocare management, we are advancing with the integration according to our plan and we look forward to joint future business ventures in Australia, New Zealand and in the greater Asia Pacific region.”

The re-branding at Sydney Airport marks the start of a gradual changeover. Swissport plans to complete the conversion of all Aerocare airport locations by the end of 2018. In addition to logos and ground service equipment at airports, a total of around 26,000 uniform parts for employees will be replaced.

“Swissport International is starting the global roll-out of its next-generation uniforms this year and our Aerocare colleagues here in Sydney will be the very first to receive the new Swissport uniforms”, says Joe Phelan, as he proudly hands over a new ramp uniform to employees present at the event.

Founded in 1992, Aerocare has become the market leader in the region. It employs more than 3’000 staff and provides services to major domestic and international airlines in Australia and New Zealand. The company manages more than 160’000 flights and serves some 15 million passengers annually. This adds roughly 6% to Swissport’s overall volume of passengers served, which stood at 250 million annually, prior to the acquisition of Aerocare, and increased to some 265 million including Aerocare.

Swissport International AG, on behalf of more than 850 client-companies, provides best-in-class airport ground services for some 265 million passengers annually and handles approximately 4.7 million tonnes of air cargo at 133 warehouses world-wide. Several of its warehouses have been certified for Pharmaceutical Logistics by IATA’s CEIV. With a workforce of 68,000, the world’s leading provider of ground and air cargo services, is active at 315 airports in 50 countries across all five continents. In 2017 the group generated consolidated operating revenue of EUR 2.8 billion.