The following table summarizes Spirit’s traffic results for the month and year-to-date ended September 30, 2013 and 2012.

Third Quarter 2013 Guidance
The Company estimates its total revenue per ASM (RASM) for the third quarter 2013 increased 8.0 to 9.0 percent year-over-year, which is better than previously expected due to stronger close-in bookings late in the quarter.

The Company’s third quarter 2013 cost per available seat mile (CASM), excluding special items and unrealized mark-to-market hedge gains, is estimated to be between 10.00 cents and 10.05 cents. Spirit estimates its CASM ex-fuel for the third quarter was between 5.86 cents and 5.91 cents. This CASM ex-fuel estimate is in line with the Company’s previous guidance range.

The following table summarizes Spirit’s updated guidance for the third quarter 2013. All data is based on preliminary estimates and is subject to change. 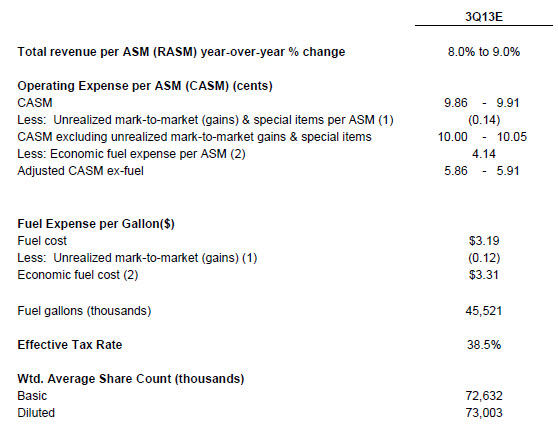 About Spirit Airlines
Spirit Airlines (NASDAQ: SAVE) empowers customers to save money on air travel by offering ultra low base fares with a range of optional services, allowing customers the freedom to choose only the extras they value. This innovative approach grows the traveling market and stimulates new economic activity while creating new jobs. Spirit’s modern fleet, configuration and other innovations enable Spirit to burn less fuel per seat than competitors, making Spirit one of the most environmentally-friendly U.S. carriers. Spirit’s all-Airbus fleet currently operates approximately 250 daily flights to over 50 destinations in the U.S., Latin America and Caribbean. Visit Spirit at www.spirit.com.