“With this special flight, we are celebrating history and setting our sights on a bright future for all of Southwest Airlines,” said Bob Jordan, Southwest Airlines’ Chief Commercial Officer and AirTran Airways President, who was on the flight to Tampa. “The work of so many People culminates in this moment as we salute the enormous accomplishments of AirTran and Southwest. For our Customers and Employees, we now move forward with one airline, one Customer Experience, one flight schedule, one Rapid Rewards frequent flyer program, and one award-winning Brand.”

More than 400 AirTran and Southwest Employees and special guests gathered in Atlanta Sunday evening to commemorate the milestone. AirTran Flight 1 retraced a route that is a nod to AirTran’s first commercial flight in October 1993. Flight 1’s flight crew consisted of longtime AirTran Employees, including the airline’s Chief Pilot, Floy Ponder, a 19-year veteran of AirTran Airways. Each of the flight’s 117 passengers, consisting of many former AirTran Employees, retirees, special guests, and aviation enthusiasts received a special keepsake celebrating the historic flight.

“As we’ve grown in both the domestic and international markets, I can’t help but think about all the doors the AirTran acquisition has opened for Southwest Airlines,” said Gary Kelly, Southwest Airlines Chairman, President & CEO, who was in Atlanta for the send-off. “The most important things—which cannot be measured and are irreplaceable—are the great People of AirTran who have worked hard to achieve this milestone, and are all soon to be part of the Southwest Airlines family.”

You may also be interested in:  Southwest Airlines® named Domestic Carrier of the Year for the eighth consecutive year by Airforwarders Association

The acquisition of AirTran was a unique opportunity to extend the Southwest network into key markets it didn’t yet serve, such as Atlanta and the greater Washington, D.C., area, via Ronald Reagan National Airport. The integration gives Southwest the opportunity to serve Customers from 93 airports in the U.S. and near-international destinations, providing Customers more low-fare destinations as it expands the well-known “Southwest Effect” to hundreds of additional low-fare itineraries for the traveling public.

Based on the U.S. Department of Transportation’s most recent data, Southwest Airlines is the nation’s largest carrier in terms of originating domestic passengers boarded. The Company operates the largest fleet of Boeing aircraft in the world, the majority of which are equipped with satellite-based WiFi providing gate to gate connectivity while over the United States. That connectivity enables Customers to use their personal devices to access streaming music provided by Beats Music or to view video on-demand movies and television shows, as well as nearly 20 channels of free, live TV compliments of DISH. Southwest is the only major U.S. airline to offer Bags Fly Free® (first and second checked pieces of luggage, size and weight limits apply), and there are never change fees, although fare differences might apply. In September 2014, the airline proudly unveiledHeart, a new aircraft livery, airport experience, and logo, showcasing the dedication of Southwest Employees to connect Customers with what’s important in their lives.

You may also be interested in:  Southwest Airlines: Applications are open for the 2019 ¡Lánzate!/Take Off! Travel Program

From its first flights on June 18, 1971, Southwest Airlines launched an era of unprecedented affordability in air travel described by the U.S. Department of Transportation as “The Southwest Effect,” a lowering of fares and increase in passenger traffic wherever the carrier serves. With 41 consecutive years of profitability, Southwest is one of the most honored airlines in the world, known for a triple bottom line approach that contributes to the carrier’s performance and productivity, the importance of its People and the communities they serve, and an overall commitment to efficiency and the planet. The 2013 Southwest Airlines One Report™ can be found at Southwest.com/citizenship. 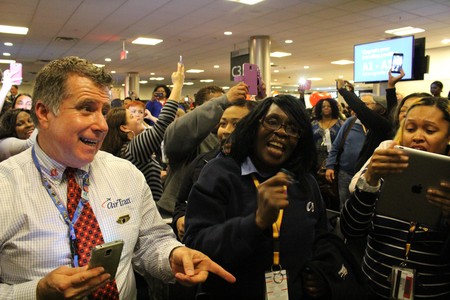