Shannon, Ireland, 2014-12-4 — /Travel PR News/ — Shannon Airport has today congratulated Ryanair on its 13th million passenger through the airport, stating that the airline’s role in keeping the West of Ireland connected with the UK and Europe has been invaluable since it began operations at Shannon.

Ryanair CEO Michael O’Leary travelled to the airport this morning to mark the milestone moment by presenting the 13th millionth passenger with a Ryanair family flight.

The passenger, Piotr Rachuta, was travelling back to Poland on the Shannon-Wroclaw flight with his wife Marta and 4year old daughter Amelia following a holiday with relatives in Tralee, Co. Kerry when they were taken by surprise as the Ryanair CEO grabbed the tannoy microphone and called out his name as the lucky 13th million passenger.

“I didn’t expect this today when I came to Shannon Airport for sure.  I am very surprised and very happy,” a beaming Mr Rachuta said.

Mr O’Leary raised a big cheer also as he announced his own version of ‘one for everybody in the audience’ as he gave away a free flight to all passengers queuing on for the 10:05a.m. Wroclaw flight. The airport also weighed with the early Christmas presents by gifting the winners Shannon Duty Free shopping vouchers and executive Lounge passes as well as a Shannon Duty Free hamper for all on the packed flight.

Afterwards, at a press conference attended by Mr O’Leary and local politicians including Minister for Finance Michael Noonan, T.D., to mark the milestone passenger achievement, Airport Chairman Rose Hynes said that the airline’s contribution to the region over the years has been immeasurable.  “If someone had told us when Ryanair started operating here first that they would have 19 destinations and deliver their 13th millionth passenger this year, you would hardly have believed it possible.

“They have significantly reduced the cost of air travel for everyone and given us connectivity to locations that we otherwise would not have.  That has been hugely important for this region, both from an outbound and inbound passenger perspective. As an island nation we are extremely dependent on air links and, as the most westerly region in Europe, here on this side of the island we are even more so.”

Airport CEO Neil Pakey said that the current Ryanair mix at Shannon is a healthy balance for both holiday and business in and out of the region.  “Ryanair, which is playing a major role in the newly independent Shannon’s growth, put on 10 new routes this year and that is going to translate into 167% growth in European passenger numbers through Shannon.  The great thing is that there is a really strong balance between inbound and outbound on this.

“They have really satisfied the demand for holidays, short breaks or even business travel out of this region.  But the introduction of services from France and Germany, in particular, this year has also been hugely beneficial from an inbound tourism perspective and generated a lot of much appreciated revenue for the local economy.

“The abolition of the travel tax has been hugely important to us. The Minister threw down the gauntlet to the airlines when he effectively gave them three months to deliver, or else he would reinstate it.  This was brave and imaginative and most importantly it has paid off in terms of stimulating the tourism economy in this country.” 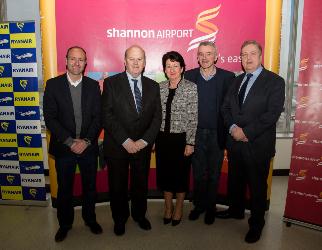