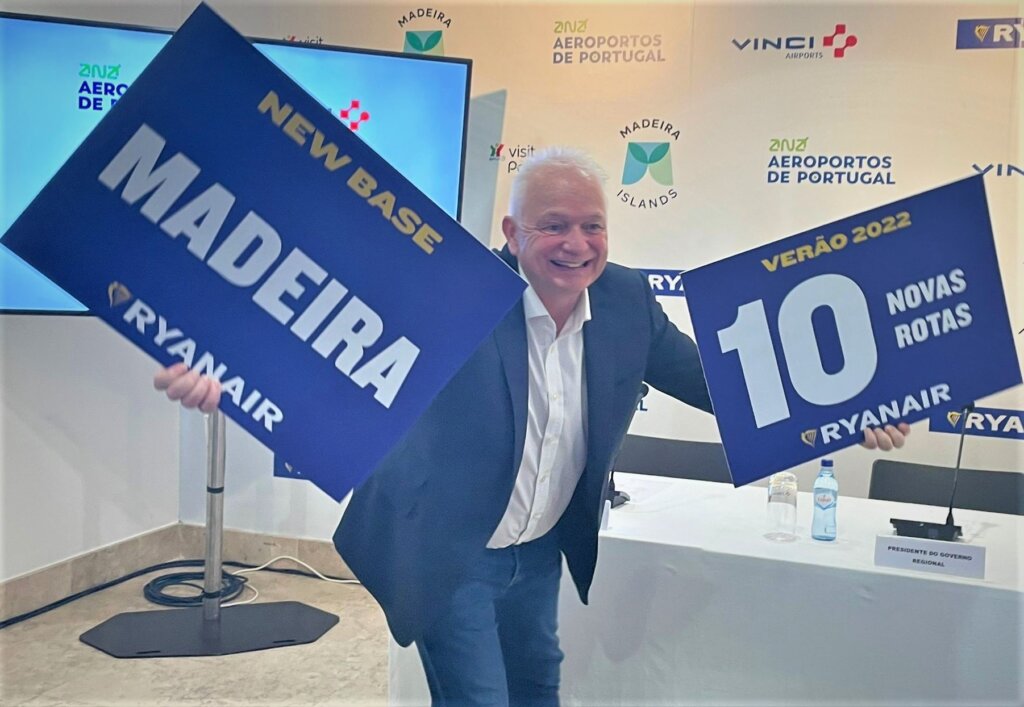 Ryanair opens its fifth base in Portugal

DUBLIN, Ireland, 2021-Nov-24 — /Travel PR News/ — Ryanair, Europe’s largest and greenest airline, today (23rd Nov) announced the opening of its fifth base in Portugal with 2 new based aircraft, representing an investment of $200m alongside the introduction of 10 new routes – connecting Madeira with mainland Portugal and with 6 other European countries, positioning the region as a leading tourism destination.

Ryanair’s new base at Madeira represents its commitment to Portugal and further demonstrates Ryanair’s ability to rapidly rebuild Portugal’s tourism industry, with over 40 weekly flights across 10 new routes, including 5 exclusive routes, next Summer. Ryanair will operate over 160 Portuguese routes next Summer (over twice as many as TAP), to 15 countries, making Ryanair Portugal’s number one carrier for choice, fares and on time performance.

To celebrate the opening of its new Madeira base, Ryanair is launching an exciting seat sale with fares from just €29.99 for next Summer – fantastic news for those planning a relaxing summer holiday or an adventurous weekend excursion to Madeira. Known for its famously fine wine and stunning scenic mountain trails, these amazingly low fares are available until Thursday 25th November only, on Ryanair.com.

“We are delighted to announce the opening of our new base in Madeira, which will deliver increased connectivity with 2 based aircraft and 40 weekly flights across 10 new routes, connecting Madeira with cities such as London, Paris, Dublin, Milan and Manchester on a year round basis. This $200m investment will not only boost Portugal’s economy by driving vital tourism but will also create more than 60 direct jobs in the region and over 400 on-site jobs in Madeira.

Efficient operations and competitive airport charges provide the foundation from which Ryanair can deliver long-term traffic growth and increased connectivity. We worked closely with our partners in Madeira airport, Tourism de Portugal and APM to secure this growth and improve the services for those that live, work, or wish to visit the region.

At a time when other airlines are reducing their fleets and closing bases, we are delighted to continue to invest in both our people and airports in Portugal. We urge the Portuguese Govt. to do likewise by opening Lisbon-Montijo, scrapping the ill-timed aviation tax (which is a direct tax on tourism) and introducing a non-discriminatory traffic recovery scheme.  All of which could be easily funded with the €3.2bn of wasteful state aid granted to the small zombie airline TAP, by the Portuguese Govt.

Ryanair will operate over 160 Portuguese routes next Summer (over twice as many as TAP), to 15 countries, making Ryanair Portugal’s number one carrier for choice, fares and on time performance.  To celebrate, we are launching a seat sale with fares available from €29.99 for travel next Summer, which must be booked by Thursday 25th November. Since these amazing low fares will be snapped up quickly, customers should log onto www.ryanair.com now to avoid missing out.”

“The announcement of Ryanair’s base in Madeira for the summer of 2022 is excellent news for the Autonomous Region of Madeira. This base is the result of a partnership with Ryanair, the Madeira Tourism Promotion Association and the Portuguese Tourism Board. In addition to reinforcing the existing partnership between VINCI and Ryanair, this base will allow, through the opening of 5 new routes in 2022, a significant increase in Madeira’s connectivity, boosting the diversification of tourist markets, so important for the recovery and growth of tourism in the region.”