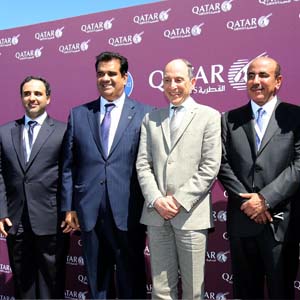 PARIS, France, 2017-Jun-20 — /Travel PR News/ — Qatar Airways captured the spotlight on the first day of the Paris Air Show, where it showcased the first of its aircraft fitted with its spectacular state-of-the-art and award-winning Business Class seat, Qsuite.

H.E. Mr. Al Baker said: “We are tremendously excited to showcase the first aircraft fitted with our revolutionary new Qsuite here in Paris. This product will transform premium travel by bringing a First Class experience to the Business Class cabin. With this innovative offering – which features the first-ever double bed in Business Class – we have set a new standard for the industry, one which demonstrates our continued commitment to providing the finest possible experience for our passengers. We look forward to the debut of Qsuite on our Doha – London Heathrow route this weekend.”

Vice Chairman of the Boeing Company, Mr. Ray Conner said, “All of us at Boeing are proud that the Boeing 777 has been selected to debut Qatar Airways’ new and innovative Business Class interior. With Qsuite, Qatar Airways is introducing a new level of innovation that will make flying a truly remarkable experience.”

Qsuite, patented by Qatar Airways, features the industry’s first-ever double bed available in Business Class, with privacy panels that stow away, allowing passengers in adjoining seats to create their own private room. Adjustable panels and movable TV monitors on the centre four seats allow colleagues, friends or families travelling together to transform their space into a private suite, allowing them to work, dine and socialise together. These new features provide the ultimate customisable travel experience that enables passengers to create an environment that suits their own unique needs.

Immediately after the Paris Air Show the first destination to feature the Qsuite will be London from 24 June, followed by service to Paris and New York, with the airline’s fleet retrofitted at the rate of one plane per month.

The Paris Air Show, taking place this week at Le Bourget Airport, is one of the world’s most anticipated aerospace events, providing the global aviation community the opportunity to demonstrate the very best and latest advances in the industry.

Earlier this year, Qatar Airways officially opened its new and luxurious Premium Lounge at the Paris Charles de Gaulle Airport. The Premium Lounge features a brasserie and deli, two terraces with spectacular views of Paris and the Eiffel Tower, shower facilities, Mac computers, Wi-Fi and seating for more than 200 guests, all of which contribute to a warm and relaxing atmosphere.

One of the world’s fastest growing airlines, Qatar Airways recently added Dublin, Republic of Ireland, to its global route network, soon to be followed by Nice, France. The airline operates a modern fleet of 200 aircraft to a network of key business and leisure destinations across Europe, the Middle East, Africa, Asia Pacific, North America and South America.

The airline was awarded the World’s Best Business Class by Skytrax in 2016, and its home hub, Hamad International Airport, was also recently honoured with five stars at the Skytrax World Airport Awards.

Qatar Airways, the national carrier of the State of Qatar, is celebrating 20 years of Going Places Together with travellers across its more than 150 business and leisure destinations. The world’s fast growing airline will add a number of exciting new destinations to its network in 2017/18, including Dublin, Nice, Skopje, Sarajevo and many more, flying passengers on board its modern fleet of 200 aircraft.

Qatar Airways proudly supports a range of exciting international and local initiatives dedicated to enriching the global community that it serves. Qatar Airways, the official FIFA partner, is the official sponsor of many top-level sporting events, including the FIFA 2018 and 2022 World Cups, as well as F.C. Barcelona, reflecting the values of sports as a means of bringing people together, something at the core of the airline’s own brand message – Going Places Together.