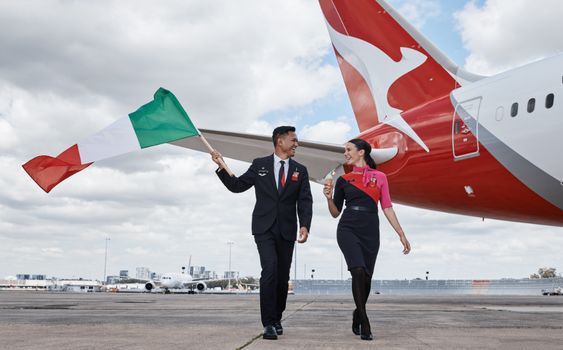 Sydney, Australia, 2021-Dec-16 — /Travel PR News/ — Qantas will reignite its love affair with Rome, adding direct flights from Australia to the eternal city from the middle of next year.

From 22 June 2022, Qantas will operate the only direct service between Australia and continental Europe, flying three return Sydney-Perth-Rome flights per week to meet demand over the European holiday peak season.

The new flight will cut more than three hours off the current fastest travel time to Rome using the Boeing 787 Dreamliner, with cabins designed specifically for long haul travel.

Customers will be able to combine Qantas’ Rome flights with its double-daily direct flights between Australia and London, meaning they will be able to fly in and out of different cities on one return ticket through to October 2022.

The Rome service will also give customers another option for reaching onward destinations across the Mediterranean and southern Europe through Qantas’ network of partners.

“We’ve seen amazing demand on our direct service from Perth to London and on our new services to Delhi from Melbourne and Sydney. These are exciting destinations and there’s strong evidence the pandemic is making non-stop flights between Australia and the rest of world even more desirable as we learn to live with the virus and its variants,” said Mr Joyce.

You may also be interested in:  Bristol Airport welcomes TUI's winter 2020 programme

“Italy is the largest market for us in continental Europe for people visiting family and friends from Australia and we think customers will love flying direct to one of the world’s great cities to spend time with loved ones or enjoy Italy.

“After the restrictions of the past few years, it’s the ideal time to reinvigorate our international network and we’ll continue to look for new opportunities.”

The new route is expected to entice more visitors to Western Australia and Qantas will partner with Tourism Western Australia to boost inbound tourism from Europe into Perth and regional WA, as well as promote Perth as an ideal stopover for Australians travelling to Europe from the east coast.

“Australia’s global reputation as a friendly, safe and unique destination is already an enormous tourism drawcard and adding Rome to the Qantas network means visitors will experience the Spirit of Australia before they even arrive,” Mr Joyce said.

Fares for the new Sydney-Perth-Rome flights go on sale today starting from $1785 return. Qantas will operate two Points Planes (bookable until 21 December 2021) for Frequent Flyers with every seat in every cabin available to book as a reward seat on the inaugural flight to Rome on 22 June and on the first flight departing Rome on 23 June.

The seasonal route will operate from 22 June until 6 October. Qantas will offer connections to 16 destinations in Europe including Athens, Barcelona, Frankfurt, Nice, Madrid and Paris and 15 destinations within Italy including Milan and Venice.

You may also be interested in:  JAL to build a Narita-based LCC network with additional investments in Spring Japan, Jetstar Japan, and ZIPAIR