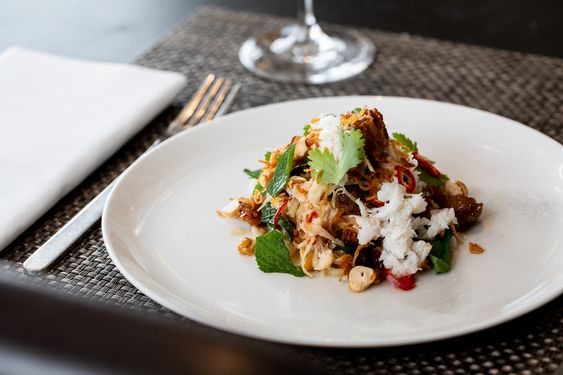 Sydney, Australia, 2022-Nov-01 — /Travel PR News/ — Qantas will reintroduce a selection of the most popular inflight and lounge menu items from the past 25 years in celebration of its silver anniversary partnership with Australian chef Neil Perry.

Perry first signed on as Director of Food, Beverage and Service with Qantas Airways in 1997, a year when John Howard was Prime Minister, Pat Rafter won the US open and Michael Caton uttered the famous line “tell him he’s dreaming” in The Castle.

Twenty-five years later, the anniversary marks the longest partnership of its kind in aviation between a chef and an airline.

For the month of November, across the Qantas First lounges in Australia, Qantas will serve a selection of the most popular retro classics to give Qantas customers a sensory stroll down memory lane, including:

In honour of the milestone, the First Lounges will also offer a Negroni Sbagliato cocktail for the month of November which was featured at the opening of the London Lounge in 2017.

A range of Neil’s favourite dishes will also be available for a limited time across the airline’s Australian domestic and international Business lounges including meatball sandwich, kung pao chicken bao and BBQ prawns.

Neil Perry said Qantas has constantly evolved its food and beverage offering to meet the changing tastes of Australians.

“In 1997, gourmet pizza, fusion food and chocolate lava cakes were among the most popular dishes. Fast forward to today and Australians have embraced a wider range of cuisines from around the world, from Japanese to Indian and Middle Eastern dishes and we have loved introducing customers to some of these new flavours.

“Over this time, it’s been fantastic to see a broader curiosity around international cuisines and plant-based dining, as well as a growing focus on sustainability, both in terms of food and packaging.

“We have become not only more adventurous with the menu offering but the availability and access to native ingredients has allowed us to incorporate some really terrific and uniquely Australian flavours in our dishes such as finger lime, Kakadu plum and lemon myrtle.

“What has stayed the same is the airline’s commitment to showcasing premium Australian produce and Qantas customers’ willingness to experience new cuisines inflight and in lounge.

“A particular highlight in my time with Qantas has been the addition of new destinations from our recent Bengaluru service to the upcoming Seoul flights which give new opportunities to innovate and feature new dishes inspired by these regions.”

One of the longest running dishes in Neil’s repertoire, the crab and sweet pork salad has been a recurring fixture on Qantas inflight menus since the early 2000s. The dish was created by Neil following a trip to Thailand in 1989 where he was inspired by the pairing of sweet and salty crab with rich sweet and spicy pork.

This dish was part of the first Neil Perry designed Qantas inflight menus from 1997 and was inspired by a trip to the north of Italy at the beginning of Neil’s career. The ragú remains a long-standing classic dish that has been featured on Qantas menus all around the world.

Neil was first introduced to Torta di Verona at the Sydney dining destination Taylor’s and it’s been a favourite ever since. Neil featured the dessert on the opening menu at the launch of Qantas’ Singapore First Class Lounge in December 2019.

From the opening of our London lounge in 2017 this ‘mistaken’ Negroni is lightened with sparkling wine in place of gin.

Dish availability will vary by lounge

This curry is an homage to Neil’s trips to South East Asia, which have inspired many dishes featuring the aromatic fragrance and complexity of Thai ingredients. Dishes in this style are regularly featured across Qantas menus because of their satisfying and delicious flavours.

Inspired by Neil’s trips in Northern Italy, this dish is simplicity in its essence and first appeared on the Qantas International Business Class menu in the early 2000s.

From his visits to Chicago and New York during his early years with Qantas, Neil absolutely loved these simple street food examples of the American Italian food tradition –tasty meatballs and tomato ragu on a sandwich. The subs have been perfect for inflight suppers and snacks in Qantas lounges since 2009.

Since first trying this dish at a Sichuan restaurant in Wan Chai, Hong Kong, Neil fell in love with the interplay of aromatic spices, dried chilli and numbing Sichuan peppercorns. These bao filled with kung pao chicken – and many other variations – have been a feature across all our lounges from 2012, particularly our Singapore Business lounge.

On his first trip to Shanghai with Qantas early in the 2000s, Neil loved the balance of flavour that comes from the fragrant addition of three equal measures of soy, black vinegar and sesame oil at the end of cooking.

Barbecued prawns with lemon and aioli

Fresh prawns cooked on the barbecue is quintessentially Australian in its simplicity and delicious flavour and showcases the quality of seafood available in Australia. Barbequed prawns featured at the opening of the Perth International Lounge when Qantas launched direct flights between Australia and London in 2018.