Amstelveen, Netherlands, 2015-5-22 — /Travel PR News/ — KLM today launched the endless flyer Jets. Jets is now available in the Apple App Store and the Google Play Store free of charge. The game has a special feature for KLM clients: KLM passengers receive an in-game reward when they get to their gate on time.

Just as KLM’s first game Aviation Empire, Jets links gaming to real life. For each ticket they purchase players are rewarded with Wings, the in-game currency. And by sending a notification, Jets helps passengers to be at their gate on time to receive even more Wings. For this KLM uses the beacon technology at Amsterdam Airport Schiphol.

“KLM is the first airline in the world that developed its own game to positively influence passenger behavior. Gaming has been one of the most dominant forms of entertainment for years.”
Tjalling Smit, Senior Vice President e-Commerce Air France KLM

According to Smit, it gets even more powerful when you link gaming to your core business: “This is something KLM strongly believes in. By implementing the beacon functionality in Jets we created a unique link between Jets as an entertainment game and the practical challenges of running an airline, like departing on time,” says Smit.

About Jets
Jets’ first levels are set in Amsterdam, the home-base of KLM Royal Dutch Airlines. Players fly their paper plane through the center of the old city and over the famous canals, while avoiding cars, trams and boats. In the single player mode they unlock new missions, collect items and set high scores. In the multiplayer mode players challenge their friends to beat them in the exact same mission they just completed. Winners can instantly share their victory on social media.

Detailed Paper World
‘Jets’ contains numerous familiar Amsterdam details such as functioning drawbridges, bell-ringing trams if you come too close and rusty bicycles almost falling into the canals. And, to complete the list, an aircraft taxiing across the viaduct at Amsterdam Airport Schiphol, KLM’s home base. 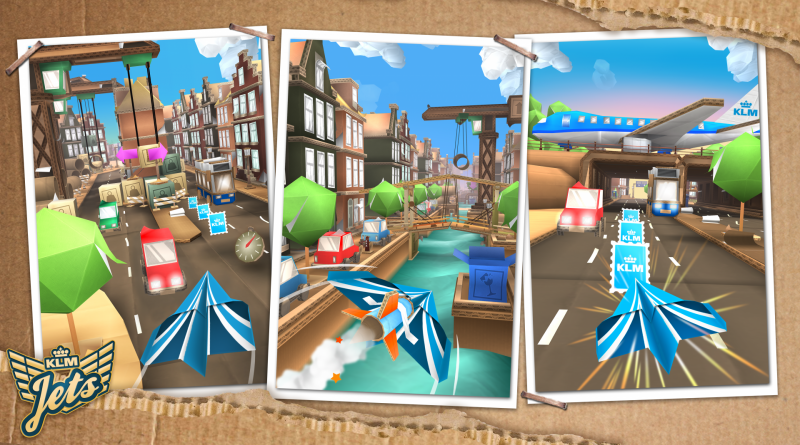