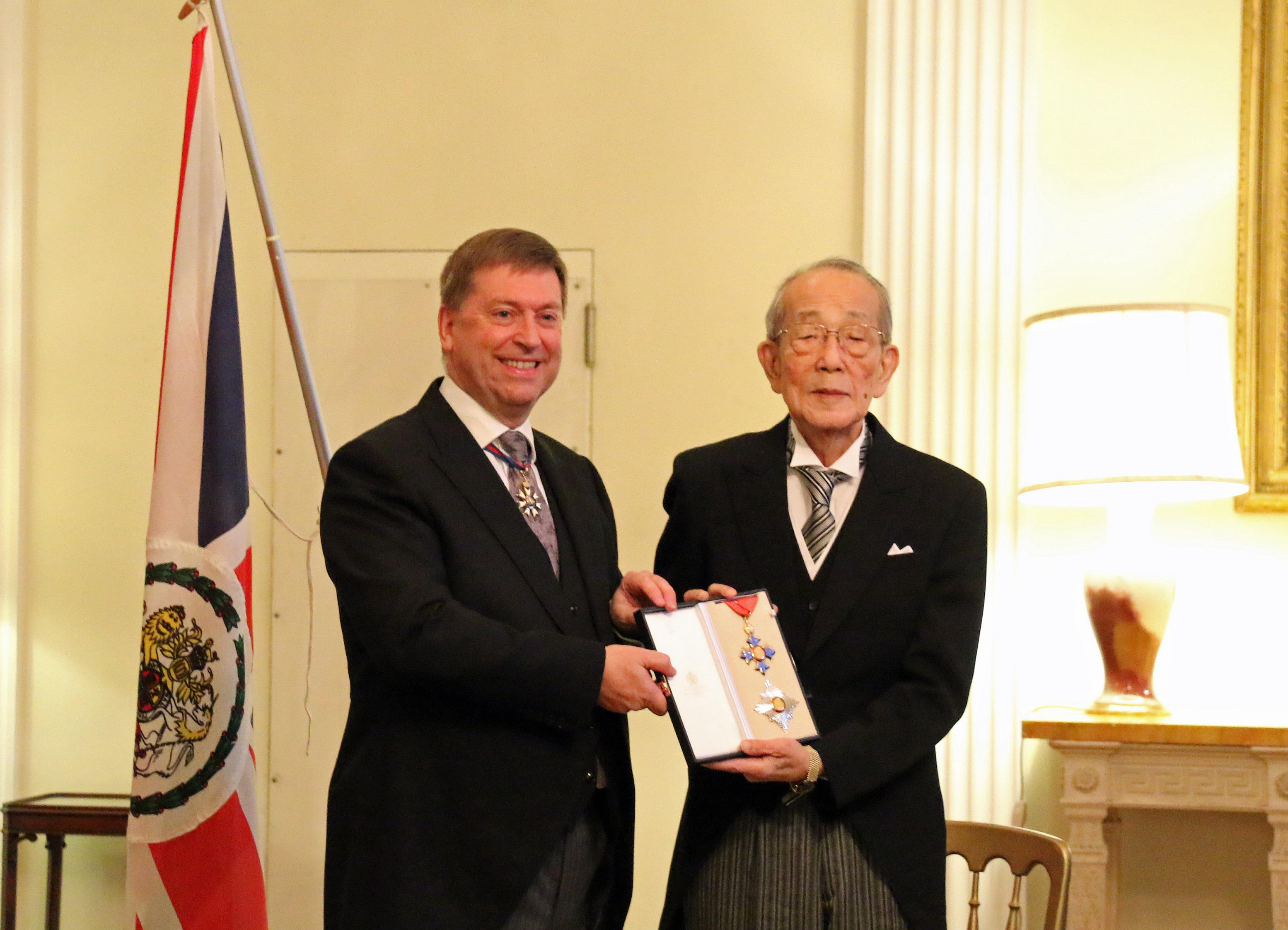 Japan Airlines congratulates Dr. Kazuo Inamori for receiving honorary KBE title from Her Majesty the Queen of the United Kingdom

Tokyo, Japan, 2019-Nov-29 — /Travel PR News/ — Dr. Kazuo Inamori, a global entrepreneur and philanthropist, recently received the title of Honorary Knight Commander of the Most Excellent Order of the British Empire (KBE) from Her Majesty the Queen of the United Kingdom.

The honor, bestowed in Japan by His Excellency Paul Madden, Ambassador Extraordinary and Plenipotentiary of the United Kingdom, during an investiture ceremony at the Ambassador’s residence, was announced by Kyocera Corporation, KDDI Corporation, Japan Airlines Co., Ltd., and the Inamori Foundation.

“The companies that Dr. Inamori founded, Kyocera and KDDI, have created thousands of jobs and revitalised local economies across the UK, including data centres in the London Docklands which carry more than half the public internet traffic in Europe. At Japan Airlines, Dr. Inamori played a critical role in negotiating the contract to purchase Airbus aircraft. The Kyoto Prize that Dr. Inamori created was recognized 12 eminent British individuals with awards since 1984. With support from the Inamori Foundation, the Blavatnik School of Government at Oxford University established the university’s newest department as one of the world’s foremost schools for public policy, educating and inspiring future generations of leaders to improve governance throughout the world for the benefit of mankind,” the British Embassy in Japan stated.

The British Ambassador Paul Madden saluted Inamori for his personal leadership and commitment, and was delighted to congratulate him on the award of an Honorary Knighthood.

Inamori established Kyocera at age 27 and began devoting himself continuously to the development and marketing of advanced ceramic materials. After the deregulation of Japan’s telecommunications market, he established DDI Corporation (now KDDI) with the goal of lowering long-distance calling fees. In 2010, at the age of 78, he accepted a volunteer assignment as chairman of Japan Airlines, leading it out of bankruptcy, returning it to solid profitability, and relisting it on the Tokyo Stock Exchange. As a philanthropist, he established the non-profit Inamori Foundation and the Kyoto Prize in 1984 to honor researchers and artists who have made outstanding contributions to the advancement and development of humankind, in order to realize his lifelong belief that “human beings have no higher calling than to strive for the greater good of humanity and the world.”

Inamori’s most recent engagement with the UK began with a lecture he gave at the Embassy in 2013. The following year, he was invited to speak at the University of Oxford. Subsequently, the university proposed hosting an annual lecture series as a forum for each year’s Kyoto Prize laureates to discuss their lives and works. The Kyoto Prize at Oxford series began in 2017 within the Graduate School’s Inamori Forum, building closer ties between Japan and the UK.

“This is really more of an honor than I deserve. I would like to express my heartfelt gratitude,” Inamori stated. “I feel that the conferment of this honor represents the greatest praise for the activities that Kyocera, KDDI, Japan Airlines, and the Inamori Foundation have fostered together with the British people in their respective histories,” Inamori continued. “I want to share this honor with everyone in each company. I will continue to make efforts so that the friendly relationship between Japan and the UK may further develop in favorable ways forever.”

About KYOCERA
Kyocera Corporation (TOKYO:6971) (https://global.kyocera.com/), the parent and global headquarters of the Kyocera Group, was founded in 1959 as a producer of fine ceramics (also known as “advanced ceramics”). By combining these engineered materials with metals and integrating them with other technologies, Kyocera has become a leading supplier of industrial and automotive components, semiconductor packages, electronic devices, solar power generating systems, printers, copiers and mobile phones. During the year ended March 31, 2019, the company’s consolidated sales revenue totaled 1.62 trillion yen (approx. USD14.6 billion). Kyocera appears on the “Derwent Top 100 Global Innovators 2018-19” list by Clarivate Analytics and is ranked #655 on Forbes magazine’s 2019 “Global 2000” list of the World’s Largest Publicly Companies.

About KDDI
KDDI is a telecommunication service provider in Japan, offering both mobile and fixed-line communications. With its well-established base of over 40 million subscribers, and through mobile services and shops offering its “au” brand, KDDI is expanding its services into the “Life Design” business, which includes e-commerce, fintech, nationwide electric power utility services, entertainment and education. With a 36-year history, KDDI is now focusing on creating smart infrastructure through IoT technologies and open innovation with partners and start-up companies in diverse industries. KDDI is accelerating the global growth of its consumer telecommunications business, with operations in Myanmar and Mongolia, and in the global Information and Communications Technology business with the “TELEHOUSE” brand. KDDI is listed on the Tokyo stock exchange (TYO:9433; http://www.kddi.com/english/ ).

About Japan Airlines
Japan Airlines (JAL) was founded in 1951 and became Japan’s first international airline. A member of the oneworld® alliance, the airline now reaches 405 airports in 66 countries and regions together with its codeshare partners with a modern fleet of 234 aircraft. Awarded as one of the most punctual major international airlines and a certified 5-Star Airline by Skytrax, JAL is committed to providing customers with the highest levels of flight safety and quality in every aspect of its service, and aims to become one of the most preferred and valued airlines in the world.

About INAMORI FOUNDATION
The Inamori Foundation was founded on April 12, 1984, by Kazuo Inamori and began operations in 1985. The Foundation seeks to actively promote peace and prosperity among all people on earth through the promotion of mutual understanding. It does this through programs of public recognition and the support of creative activities to foster science, culture, and the enrichment of the human spirit, as well as through social contributions.