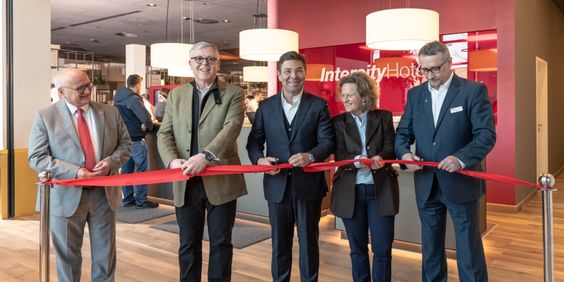 Berlin, Germany, 2023-Jan-22 — /Travel PR News/ — It’s hard to get any closer: with a symbolic ribbon-cutting ceremony, the IntercityHotel Berlin Airport BER opened directly on Willy-Brandt-Platz at Berlin Brandenburg Airport on 19 January 2023. The six-storey 3-star hotel offers guests from all over the world around 360 rooms, five meeting and conference rooms, a sauna and fitness area as well as a restaurant and hotel bar. Terminals 1 and 2 of BER Airport are within walking distance.

Christian Hentschel, mayor of the municipality of Schönefeld in Brandenburg, said on the occasion of the opening: “We are very pleased to welcome another Deutsche Hospitality property directly at the airport with the IntercityHotel. The owner, Dietz AG, and the operator, Deutsche Hospitality, are thus ensuring sustainable growth in the region and creating jobs in the immediate vicinity.”

Dr Wolfgang Dietz, Managing Director of Dietz AG, adds: “For Dietz AG, the IntercityHotel is a sustainable investment in the region. For us, the Berlin-Brandenburg location and BER Airport are beacon projects for sustainable, regional construction with international appeal.”

The new IntercityHotel with a gross floor area of around 14,000 square metres is the second hotel in the direct vicinity of the terminals, alongside the Steigenberger Hotel, and adds the 3-star category to the hotel offering at BER. Like the Steigenberger Airport Hotel, it is part of the Deutsche Hospitality portfolio. Another IntercityHotel, the IntercityHotel Berlin-Brandenburg Airport, is also located near the airport. It is located not far from the station at BER Airport – Terminal 5 (Schönefeld).

You may also be interested in:  German Technical Inspection Agency South TÜV SÜD recertifies Deutsche Hospitality websites for the third year in a row

Josef Dolp, Chief Operations Officer Deutsche Hospitality: “Berlin-Brandenburg and the airport are immensely important locations for Deutsche Hospitality. With a total of six hotels and further projects in the pipeline, we have a team in Berlin that is looking forward to welcoming business travellers and tourists from all over the world to the German capital. The IntercityHotel is ideal for pre- and post-travel overnight stays and stopovers for business travellers, as well as families.”

Aletta von Massenbach, Chairwoman of the Management Board of Flughafen Berlin Brandenburg GmbH: “The new Intercityhotel is an asset for our airport. It means that our passengers can now choose from a range of accommodation options directly at BER. Willy-Brandt-Platz will also gain in urbanity and flair when more guests from all over the world stay there.”

Mathias Rusch, General Manager IntercityHotel Berlin Brandenburg BER: “Berlin Brandenburg Airport is the beginning and the end of unforgettable journeys. With the new IntercityHotel, you are not only in the middle of the action, but also part of a community of international travellers. The whole team at the hotel is looking forward to welcoming guests to our hotel.”

The IntercityHotel Berlin Airport BER joins the extensive portfolio of IntercityHotel: with over 40 hotels in Germany, Austria, the Netherlands, China and the Middle East.

If you want to become part of the IntercityHotel family: Deutsche Hospitality offers a wide range of career opportunities on three continents and within a brand family of five operating brands – from Steigenberger Icons, IntercityHotel to Zleep Hotels. Career opportunities also include the Steigenberger Academy, Deutsche Hospitality’s own and renowned academy for the next generation of hospitality executives.

You may also be interested in:  Oakland International Airport expects high volume of passengers this Independence Day holiday weekend

Vision, passion and cosmopolitanism. Deutsche Hospitality delivers the perfect guest experience. Tradition and an eye for the future come together in an inimitable portfolio of eight brands operating across more than 160 hotels globally. “Celebrating luxurious simplicity.”: Steigenberger Icons are extraordinary luxury hotels which combine historical uniqueness and modern concepts. The Steigenberger Porsche Design Hotels brand is generating innovative impetuses in the Luxury Lifestyle Segment. Steigenberger Hotels & Resorts represent the epitome of upscale hospitality on three continents. Jaz in the City’s Lifestyle Hotels dictate the rhythm in the Upscale Sector. House of Beats unites a passion for the hotel business with the fascination of lifestyle, fashion and music. IntercityHotel is located at the very hub of any destination and offers a true home of comfort and mobility in the Midscale Segment. MAXX by Deutsche Hospitality is a charismatic conversion brand which is also positioned in the midscale area of the market. Zleep Hotels provide a smart marriage of design and functionality in the Economy Segment. All of these brands are unified under H-Rewards, Deutsche Hospitality’s loyalty program which yields benefits from the first booking onwards.