The Spanish airline has installed air sampling equipment on an Airbus A340-300 used on Spain-Latin America routes, to measure quantities of H2O, O3, CO, CO2, NOx, and aerosols at high altitudes.

The aircraft will collect and report the data for several years, showing variations over time. The data will also be reported to weather services almost in real time. The IAGOS project is intended to monitor and predict climate change, in order to help design policies. The air sample data furnished by the airlines cannot be collected by satellites or by ground-based weather stations. Iberia corporate development manager Sergio Turrión commented,“our participation in the IAGOS project is an example of Iberia’s major contributions to environmental protection, which include the incorporation of cleaner aircraft and numerous initiatives to reduce harmful emissions and put our business on an increasingly sustainable footing.”

Also participating in the IAGOS project are Lufthansa, China Airlines, Cathay Pacific and Air France. Iberia was chosen because of its prominence on Europe-Latin America routes. 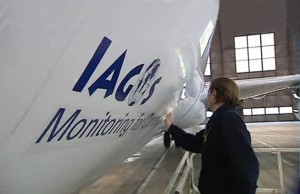