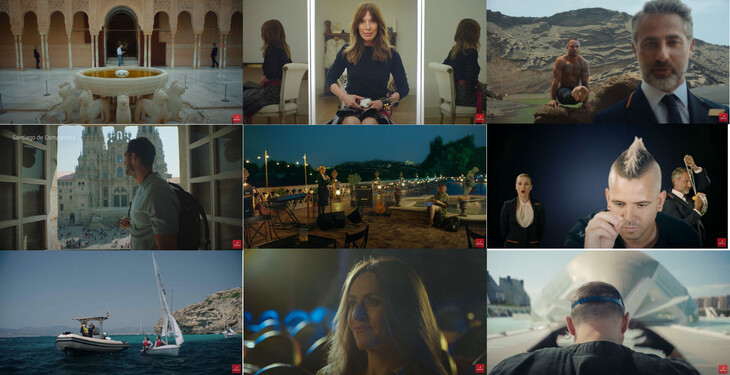 Madrid, Spain, 2023-Jan-14 — /Travel PR News/ — In an event led by the actors Gorka Otxoa and María Castro, which will be attended by the Minister of Industry, Commerce and Tourism, Reyes Maroto (TBC), this afternoon, at the Madrid Matadero cultural centre, Iberia and Turespaña will unveil a very special tourism marketing campaign to bring the best of Spain to the world.

At FITUR´s door, Iberia and Turespaña will present a project on which they have been working during 2022 to promote Spain among the nearly seven million customers who fly with Iberia each year between Europe and America.

One of the key parts of this project is the new on-board safety video that will be shown on the 36 aircraft in Iberia’s long-haul fleet, which operate the American´s airline routes: 26 destinations in 17 countries, including the United States, Argentina, Colombia, and Mexico, where Turespaña is focusing on attracting high-income visitors to our country.

You may also be interested in:  Lufthansa Group signs new distribution agreement with Amadeus to improve travel retailing

50% of Iberia´s long-haul travellers are connecting passengers via Madrid coming from any of the more than 50 destinations in Europe offered by the airline, thereby maximising the impact on potential international visitors to Spain.

“This collaboration with Iberia allows us to directly reach its millions of customers who arrive on its long-haul flights and show them that in Spain they can enjoy not only our beaches and good weather, but also rich cultural and gastronomic experiences, and exceptional leisure choices. The video reflects the diversity and richness of our nation, its natural landscapes, its vibrant cities, the north and the south, its islands, the coast, and mainland Spain, still undiscovered by many travellers. Places, all of them, where you can enjoy memorable experiences”, says Miguel Sanz, General Director at Turespaña.

In addition to the on-board safety video, which will be shown at the start of Iberia´s flights as part of the security protocol, Iberia and Turespaña launched a tourism promotion campaign in the media -showing outdoor locations in the abovementioned cities- and on social networks.

The on-board safety video that Iberia will offer in collaboration with Turespaña showcases Spanish talent in all disciplines and explores privileged enclaves of our geography.

The video takes off with the actress Itziar Ituño walking through the streets of Madrid to arrive at the Teatro Real, where Iberia’s cabin crew welcomes her.

The music and images show us a panoramic view of Toledo, where the singer Rozalén receives instructions on the use of electronic devices on board.

You may also be interested in:  UK Civil Aviation Authority Launches Call for Evidence on Environmental Information for Flight Bookings: Aiming to Standardize Approach and Empower Informed Decisions

The singer keeps her mobile phone in a backpack that becomes the hand luggage of the judoka Niko Shera, accompanied by Iberia’s cabin crew, as he wanders through the Plaza del Obradoiro, in Santiago de Compostela.

The images take us to a cliff in Finisterre where the judoka follows the instructions on placing his hand luggage, leaving the plane’s aisles and evacuation routes free.

We then jump to Lanzarote; on a volcanic beach, the gymnast Ray Zapata simulates the position of the backrest for take-off and landing, how to raise the window blind, and how to fold up the footrest and table.

Ray’s last pirouette takes us to Barcelona, to the workshop of the designer Teresa Helbig, where we learn how to fasten the seat belt, while the dressmaker fits the Iberia crew with the uniform that she designed, and that the airline debuted last year.

The cabin crews walk, as if they were moving down the aisle of the plane and arrive at the Alhambra in Granada. The columns of the Court of the Lions simulate the exit doors, four on each side of the plane. This time it is the painter Pedro Paricio who listens to the instructions.

From a magical door in the Alhambra, the cabin crews jump onto a rescue boat wearing life jackets and, by their side, the sailor Silvia Más, listens, surprised, to their instructions as she sails along the coast of Mallorca.

The video jumps back to Dabiz Muñoz’s kitchen to explain the use of the safety mask in case of an emergency on board.

You may also be interested in:  Spain's capital welcomes its first luxury lifestyle urban resort — The Madrid EDITION

The movements of the Madrid chef lead us to another visual artist, Susso33, who also puts on a mask to paint, on the City of Arts and Sciences in Valencia, a large no smoking on board sign.

And back to the Teatro Real in Madrid: Itziar Ituño is already preparing to take off while checking the safety instructions. The curtain closes with the message “happy flying”.

All the participants in the safety video are part of the Talent on Board project that Iberia launched in 2019, with the aim of supporting Spanish and Spanish-speaking talent, and as one of the pillars of its brand mission: to connect people and cultures, generate prosperity, all with a Spanish accent.

As part of its on-board talent project, Iberia has already supported more than 100 sports, culture and R+D+i initiatives. “After more than three years marked by the pandemic, we want to give new impetus to our Talent on Board project, because it is undoubtedly one more way of addressing Iberia’s mission while being consistent and inclusive and valuing the best of our culture and language, which we share with Latin America”, says Gemma Juncá, Director of Marketing and Brand at Iberia.

The latest talent to join the project is Julieta Venegas who will close the event with a musical performance.