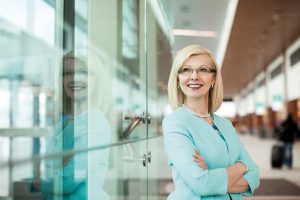 Mr. Samaddar will assume a new leadership position as Vice Chair of Airports Council International – North America (ACI-NA), of which the CAC is a division. ACI-NA represents airports throughout the U.S. and Canada.

“It has been a pleasure to work with Joyce over the past few years during her time as Vice Chair of the CAC,” said Mr. Samaddar. “Joyce has exceptional senior leadership experience and an outstanding record of achievement. She has been instrumental in her airport’s successful growth, promoting the efficient movement of people and goods, and providing travellers and communities with access to more air service options.”

Ms. Carter joined HIAA in 1999 and was appointed President and CEO in 2014. A graduate of Saint Mary’s University and the Institute of Chartered Accountants of Nova Scotia, she was awarded the prestigious designation of Fellow Chartered Accountant (FCA) in 2012 and obtained the Institute of Corporate Directors (ICD.D) designation in 2015. Prior to becoming President and CEO, Ms. Carter held a variety of senior positions at HIAA, including VP, Finance, Chief Financial Officer and Chief Strategy Officer. In addition to her position on the board of the CAC, Ms. Carter also serves on the ACI World and ACI-NA boards of directors.

Ms. Carter is also a member of Women in Aviation International and Women in Aerospace Canada – Atlantic, and continually promotes the integral role women play in the transportation and aviation/aerospace industry. An active community leader, Ms. Carter has served as a director for several organizations, including Dalhousie University, Waterfront Development Corporation Ltd. (now Develop Nova Scotia) and the Mental Health Foundation of Nova Scotia.

She is the recipient of a number of honours and awards, including Business Leader of the Year (Halifax Business Awards), the Ambassador Award, and was named one of Atlantic Canada’s Top 50 CEOs for the past three years.

“I’m looking forward to my new role with the CAC, the voice of Canada’s airport’s, working with government and other industry stakeholders to provide travellers with safe, comfortable air access that connects Canada with the world,” said Ms. Carter. “Canada’s airports are an economic success story both nationally and regionally, with airport operations sustaining nearly 200,000 direct jobs across Canada.”

In addition to serving as chair of the CAC, Ms. Carter also joins the executive committee of ACI-NA.

“The partnership and collaboration between airports in Canada and the U.S. has never been stronger,” said Ms. Carter. “The multinational nature of ACI-NA means Canadian airports can continue to work closely with colleagues in the U.S. to improve cross border processes, while learning from innovation and best practices being developed at airports around the world.”

RJ Steenstra President and CEO of the Fort McMurray Airport Authority has been elected as the new Vice Chair of the CAC.

Previously, Mr. Steenstra served as Vice Chair of the CAC Small Airport Caucus, where he championed industry priorities and echoed the voice of Canada’s regional airports.

With their terms ending, Mike Seabrook, President and CEO, Greater London International Airport Authority and Chris Wood, Airport General Manager, Region of Waterloo, leave the CAC board with the thanks of the association for their service in advancing the cause of Canada’s airports.