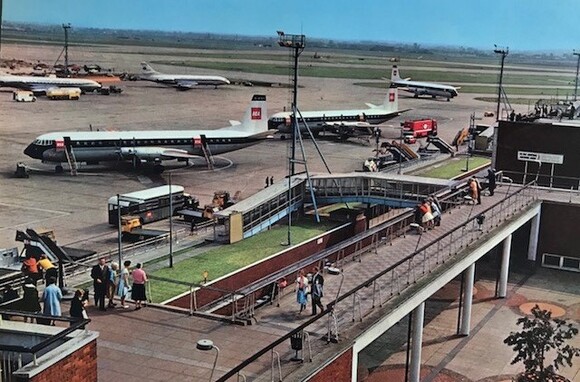 London, UK, 2021-May-28 — /Travel PR News/ — This week marks a major milestone in the airport’s history – Heathrow celebrates 75 years as a commercial airport on 31st May 2021.  To kick off the commemoration, the airport has been on the look-out for its very own ‘Heathrow Historians’, aiming to highlight the airport’s history through the personal stories and memories of colleagues, passengers and members of the local community.

Despite the most difficult year in its history, the UK’s Hub airport is using this anniversary to reflect on the huge journey of growth undertaken in its 75 years, and to look ahead at what the next 75 could bring.

Since opening for civilian aviation in 1946, Heathrow has welcomed over 2.5 billion passengers through its doors and has played host to some of Britain’s most memorable moments: from British ESA astronaut Tim Peake landing at Heathrow following his six-month trip to the International Space Station or the Beatles returning to the UK as global superstars in 1964; to the arrival of Her Majesty the Queen onto sovereign soil for the very first time as the reigning monarch and the iconic Love Actually scenes, filmed at Terminal 3 in 2003.

Stories, memorabilia and archive imagery are all available to view now on the Heathrow Historians virtual museum [Heathrow Historians | Heathrow], including memories from Mike Tunstall about the last Concorde flights, and Ian Bird, who monitored airport operations for any risk from the Millennium Bug back in 1999. In addition, the airport has scoured its own archive, based at the University of West London, to showcase a selection of momentous moments from the past 75 years, such as HRH The Prince of Wales and Diana, Princess of Wales opening Terminal 4 in 1986; and the arrival of the first ever A380 to Heathrow, in 2006. Longstanding airport partners, British Airways, NATS and WH Smith have also contributed to the virtual museum.

Heathrow Historian Keith Bollands said, “It was my first-ever flight from Heathrow’s Terminal 1 at the age of 10 that sparked what has been a life-long interest in aviation. From then, to visiting the roof gardens of the Queens Building in the school holidays, and to my role in the Security Team at Heathrow, the airport has played a significant part in my life. I’m so pleased to see just some of my memories of visiting, travelling through and working at such an iconic location reflected in the archive.”

Heathrow CEO John Holland Kaye said: “Over the past 75 years Heathrow has undergone an incredible transformation, from a once military airport, to a national asset and globally recognised brand.

“Heathrow Historians provides us with the opportunity to celebrate the people who make Heathrow possible, and to commemorate the long-serving connections many of our colleagues, passengers and local community members share with the airport. As we cast our eyes forward to the next 75 years, I look forward to watching Heathrow recover from its worst year to grow from strength to strength, protecting the benefits of aviation for future generations to come.”

Heathrow stands tall as an iconic British institution and is proud of its extensive history, the journey of growth it has undertaken over the last 75 years and the vital role it plays to the future success of a truly Global Britain. The global pandemic has created unprecedented challenges, meaning the airport has had to draw on its seven decades of experience in safely and securely seeing passengers on their way.

In its 75th year, Heathrow is looking forward to getting back to what it does best – reuniting friends and families, creating connections and making memories – reminding the nation of the possibility of journeys to come.

The public are encouraged to submit their own Heathrow memories to the virtual museum by emailing Heathrow_historians@heathrow.com, where the submissions will be assessed before being added.

The stories and gallery can be viewed at Heathrow Historians | Heathrow

Heathrow is the UK’s only hub airport and one of the world’s top international aviation hubs. The airport is Britain’s largest cargo port, helping to drive British trade growth and assisting the country in the fight against COVID-19, with 46% of the country’s pharmaceutical products imported through Heathrow in 2020. The airport is currently ranked by passengers as the “Best Airport for Shopping” for 11 years in a row.