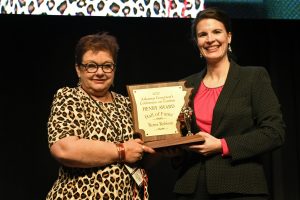 LITTLE ROCK, Ark., 2020-Mar-05 — /Travel PR News/ — Renee Robison, executive director of the Grand Prairie Center, and Wayne Woods, co-founder of CJRW, were inducted into the Arkansas Tourism Hall of Fame during a noon luncheon Monday, March 2, at the 46th annual Arkansas Governor’s Conference on Tourism. The conference is being held at the Fort Smith Convention Center March 1-3.

The Hall of Fame honor is presented annually to an individual or individuals who have been actively involved in tourism for many years and who have made substantial contributions to the betterment of the industry as a whole.

Renee Robison has been a part of Arkansas’s tourism and hospitality industry for more than 35 years. She led the state’s efforts to launch an outreach program for the motorcycling travel market and was the brainchild behind “The A-Team,” a statewide sales team that promotes The Natural State at tourism tradeshows across the nation and the world.

In her current role as executive director of the Grand Prairie Center in Stuttgart, Robison has been instrumental in securing programming, conferences and other events that bring a positive economic impact to the entire state.

Wayne Woods retired five years ago from a career in tourism marketing that spanned from 1970 to 2015. He first worked with his brother Shelby at the Woods Brothers Agency, focusing on tourism promotion across the state. Over time, the agency grew and in 1990 merged with the state’s largest agency run by Wayne Cranford, Jim Johnson and Ron Robinson, to form CJRW.

Over the years, Woods was instrumental in transforming state tourism into a multibillion-dollar industry. With others, he helped persuade the Arkansas Legislature to pass a two percent tax on the hospitality industry, a measure that generates millions of dollars a year for the state. Woods played a key role in organizing the first Arkansas Governor’s Conference on Tourism and the Arkansas Tourism Development Foundation.

For more information contact Leah DiPietro at leah.dipietro@arkansas.gov or 501-682-7606.