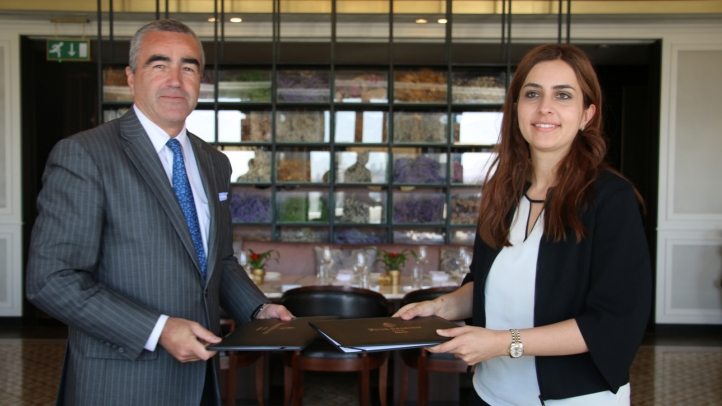 The signing, which took place at Four Seasons Hotel Amman, was attended by the management team from both organisations. Director General Enaam Barrishi signed on behalf of JRF while Regional Vice President and General Manager Vincent Hoogewijs signed on behalf of Four Seasons Hotel Amman. The partnership engages the Hotel’s La Capitale restaurant, which launched a one year fundraising initiative on March 8, 2017 in celebration of International Women’s Day.  La Capitale is adding a JOD 1 to each table bill to support JRF’s work, and throughout the month of March matched the amount raised.

JRF General Director Enaam Barrishi stated that, “Four Seasons Hotel Amman has been instrumental in the success of many JRF initiatives. Its continuous support to our work helps us achieve more, reach more and raise more awareness on the important work JRF does in creating sustainable livelihoods for Jordanian communities.”

Sharif Hayek, General Manager at La Capitale said: “La Capitale is committed to being a responsible and caring community partner by supporting the Jordan River Foundation’s programs that encourage community empowerment work in Jordan. Through this partnership, La Capitale will support JRF’s mission to help Jordanians realise their full economic potential and overcome social challenges. In March, we dedicated all our support towards women-focused empowerment programs by adding JOD 1 to guests’ bills, while we matched the donation per table at the end of the month. We appreciate everyone’s contribution and support and I believe that all together, we can make a lasting impression on our local community. ”

Engaging the private-sector brings much needed value to the development work in Jordan, and JRF is committed to developing partnerships that promote such engagement and collaboration that help realise opportunities that bring economic growth and sustainability to the lives of women, children and youth in Jordan.