Amman, Jordan, 2013-12-05 — /travelprnews.com/ — Staff members from Four Seasons Hotel Amman embarked on a major tree-planting initiative in partnership with Al Shajarah Society, a local NGO dedicated to reforestation in Jordan.  About 40 Hotel staff members planted 500 Almond and Oak trees in Berein as part of the hotel’s commitment to preserve and revitalize the local environment by supporting the growth of vibrant forests across the Kingdom.

“In line with our role and commitment to contribute to a better future for the local community and the local environment, we have been collaborating with Al Shajarah Society since 2011, planting a total of 3000 trees in various forests across the Kingdom,” said Livio Faverio, General Manager of the Hotel. “Jordan is a beautiful country and our aim is to maintain that beauty by creating more abundant and green forests.”

Rasha AlMousa, General Manager of Al Shajarah Society, stated, “We are honoured to have such a solid and long-lasting partnership with Four Seasons Hotel Amman. We share the same vision of committing ourselves to the local community and its surrounding environment and that is why, together, we have been successful in protecting Jordan’s beautiful forests.”

Planting trees is one of the many ways in which Four Seasons lives its values– In 2011 Four Seasons Hotel Amman staff members planted 2000 trees in Jerash, in 2012 they planted 500 trees in Madaba, and this year rounds the number up to 3000 trees, with 500 planted in Berein. 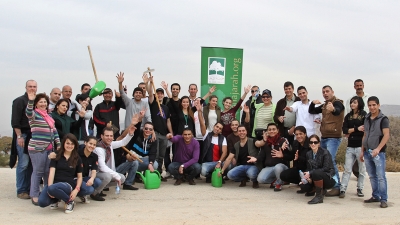