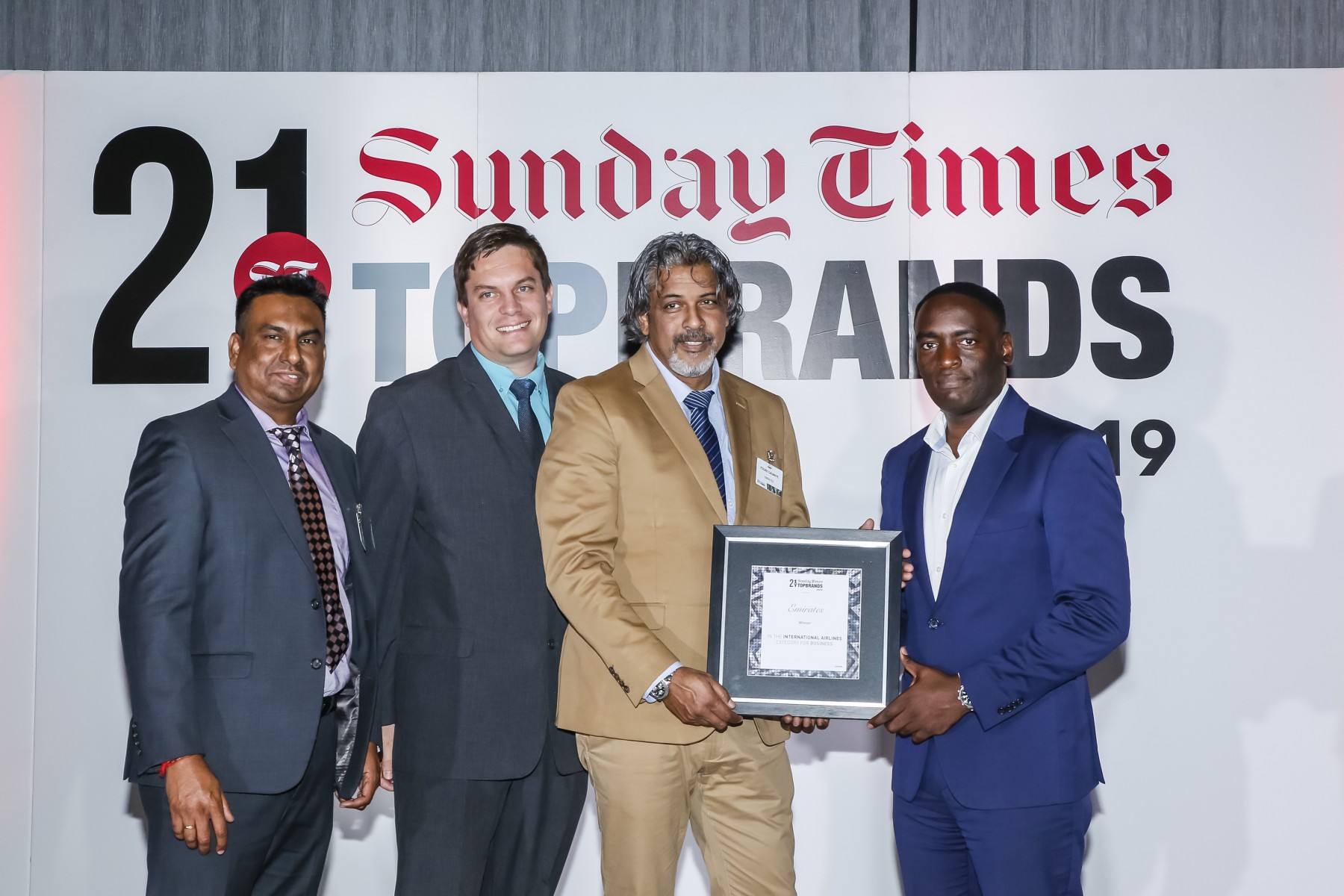 JOHANNESBURG, SOUTH AFRICA, 2019-Sep-23 — /Travel PR News/ — Emirates was named Best International Airline in the Business category and came in second place as the Overall Favourite Brand in the business category, a Grand Prix award, at the 2019 Sunday Times Top Brands Awards. Results were announced at a private ceremony held at The Venue at The Houghton, in Johannesburg.

Now, in its twenty-first year, the Sunday Times Top Brands Survey is regarded as the country’s most-prestigious barometer of consumer sentiment towards companies. Results in the Business category are based on online interviews with over 450 senior business executives and decision makers.

Fouad Caunhye, Regional Manager of Emirates Southern Africa accepted the award on behalf of the airline and commented, “To be recognised by the Sunday Times and by our South African passengers, is the best validation we could receive of our onboard product and travel experience. We have a driven, passionate team in South Africa that constantly perseveres to deliver memorable experiences for our customers, and this award is testament to those efforts.”

Emirates provides one of the most comprehensive and state-of-the-art entertainment and communications services in the skies. Their award-winning inflight entertainment system, ice offers over 4,000 channels of entertainment, including South African movies and music. Passengers across all classes are also treated to the largest screens in the industry for each cabin at 13.3 inches for Economy Class, 23 inches for Business Class and 32 inches in First Class. Earlier this year, Emirates introduced its award-winning First Class cabin to the coastal city of Durban, during a seasonal increase of four additional flights a week, allowing travellers to enjoy the luxury product offering that the airline is so well-known for.

In addition, Emirates’ long-standing relationship with wine producers from all over the globe has allowed the airline access to exclusive wines. Some of the South African wineries served onboard include Ken Forrester, Porseleinberg, Klein Constantia, Waterkloof and Boekenhoutskloof, to mention a few. Passengers can also enjoy gourmet, regionally-inspired menus that include a variety of South African inspired dishes such as ostrich and Rooibos tea.

Emirates employs around 23,000 cabin crew made up of 135 nationalities all of whom, demonstrate a sense of hospitality, iconic to their airline. South Africa ranks among the top five countries for Emirates pilots, with over 1,000 locals working for the airline, extending the nation’s famous customer service to travellers worldwide.

Emirates operates a total of seven flights daily to South Africa. This includes four daily flights from Dubai to Johannesburg – of which two flights are served by the iconic A380, two daily flights to Cape Town and a daily flight to Durban. Passengers travelling from Emirates’ touchpoints in South Africa can connect to over 150 destinations in 85 countries, via Dubai.

The Emirates story started in 1985 when we launched operations with just two aircraft. Today, we fly the world’s biggest fleets of Airbus A380s and Boeing 777’s, offering out customers the comforts of the latest and most efficient wide-body aircraft in the skies.