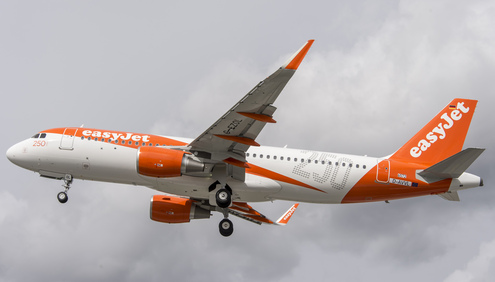 easyJet introduces sixth aircraft at its Belfast base

LONDON, 2017-Sep-29 — /Travel PR News/ — easyJet, Europe’s leading airline, has confirmed a milestone for expansion at its Belfast base, with the introduction of an A320 aircraft- the sixth aircraft to be positioned at the airline’s Northern Ireland base. The aircraft is scheduled for delivery on 22nd June 2018 and will remain based in Belfast throughout the year.

From summer 2018 easyJet will now base three A319 and three A320 aircraft at its Belfast International Airport base.

As Northern Ireland’s largest airline, easyJet operates more than 32 flights per day between Belfast and London and has already added over 6,000 seats to the route this winter. This ongoing growth demonstrates the airline’s long-term commitment to Northern Ireland, connecting Belfast with London and other popular destinations.  With fares as low as £22.49* from Belfast to London, that’s 23% cheaper than when the airline launched its first route for £29.99, 22 years ago.

“We are absolutely delighted to be celebrating further expansion at Belfast Airport. The addition of another aircraft will help us to deliver long term, sustainable growth at the base providing passengers with a greater range of destinations, all with low fares and great service.

“easyJet is the largest airline in Northern Ireland and we have been committed to Belfast airport for over 19 years. We are proud to have carried over 50 million passengers in that time.”

“We are pleased once again to acknowledge easyJet’s strong focus on developing the UK market by adding a sixth aircraft to their Belfast base.  As Northern Ireland’s leading airline they continue to be a strong supporter of the local economy creating even more capacity and choice for Northern Ireland consumers.”

easyJet serves 28 routes from Belfast airport, offering up to 636 flights per week. The airline connects Northern Ireland with the largest number of London airports than any other airline.

For more information about easyJet flights from Belfast visit www.easyJet.com

*Fares per person, one way, based on two people travelling on the same booking.

easyJet flies on more of Europe’s most popular routes than any other airline. easyJet carries over 78 million passengers annually, of which more than 12 million are travelling on business. easyJet flies over 270 aircraft on more than 880 routes to over 140 airports across 31 countries. More than 300 million Europeans live within one hour’s drive of an easyJet airport.