The airline is the first in the world to have collaborated with Flightradar24 to integrate the feature into a mobile app, meaning passengers can view the exact whereabouts of the aircraft they are due to fly on in real time up to three hours before their flight. Family and friends of passengers flying can also track their loved ones’ flight ahead of their arrival.

The feature is the result of a purpose built Software Development Kit that was specially created for easyJet by Flightradar24 and uses GPS information that is sent from easyJet’s 240+ aircraft. The flight tracking software, which went live on the app this morning, will show the aircraft’s route, speed, type of aircraft, altitude, distance travelled and total distance to destination.

“We’re delighted to have launched live location-based flight tracking to our award winning app. More than 800,000 customers use our app every week to make travelling across our network of more than 780 routes even easier – it’s fast becoming the essential travel companion for Generation easyJet.”

“It’s great to bring together Flightradar24’s unique flight tracking visualization with an innovative airline such as easyJet to carry the passenger experience to the next level.”

In addition to the new feature, easyJet have added 3D Touch functionality to its app, meaning users of the iPhone 6s and 6s Plus can benefit from getting to four key app areas even quicker. By pressing deeply on the app icon, users can jump to Book Flight, My Flights, Boarding Passes and Flight Tracker options instantly.

In recent years easyJet has embraced technology to help make passenger journeys easier and more seamless. easyJet’s app is the fastest airline app available and has now been downloaded more than 14.5 million times. It is available to download now on the App Store.

easyJet flies on more of Europe’s most popular routes than any other airline. easyJet carries over 68 million passengers annually, of which around 12 million are travelling on business. easyJet flies over 240 aircraft on more than 780 routes to over 130 airports across 31 countries. More than 300 million Europeans live within one hour’s drive of an easyJet airport.

easyJet aims to be a good corporate citizen, employing people on local contracts in seven countries across Europe in full compliance with national laws and recognising their trade unions. The airline supports a number of local charities and also has a corporate partnership with UNICEF which has raised over £6m for the most vulnerable children since it was established in 2012.

Innovation is in easyJet’s DNA – from our launch almost 20 years ago when we changed the way people fly to the present day where we lead the industry in digital, web, engineering and operational innovations to make travel more easy and affordable for our passengers.

About Flightradar24 AB:
Flightradar24 tracks positions of aircraft in real-time and turns that data into engaging consumer and commercial applications. The data comes primarily from a proprietary, crowd-sourced network of 8,000+ so-called ADS-B receivers hosted by private individuals and companies all over the world. This network of ADS-B receivers is the largest in the world.

In addition to ADS-B data, Flightradar24 is able to get positional data for non-ADS-B equipped aircraft through the use of Multilateration (MLAT). The ADS-B and MLAT data is merged with schedule and flight status data from airlines and airports to create a unique flight tracking experience. More information about how Flightradar24 works is available here: http://www.flightradar24.com/how-it-works

Through its website and apps, Flightradar24 serves over 1.5 million unique users per day and its app has been the #1 selling app overall in Apple’s AppStore in over 100 countries. Most airlines and many other companies in the aviation industry (including Airbus, Boeing and Embraer) use Flightradar24’s flight tracking services. 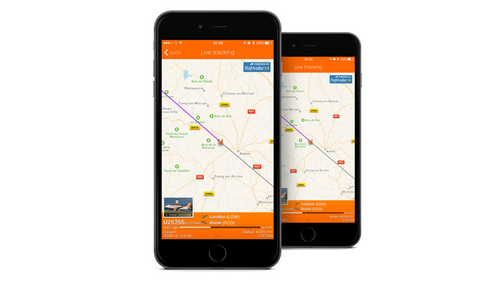