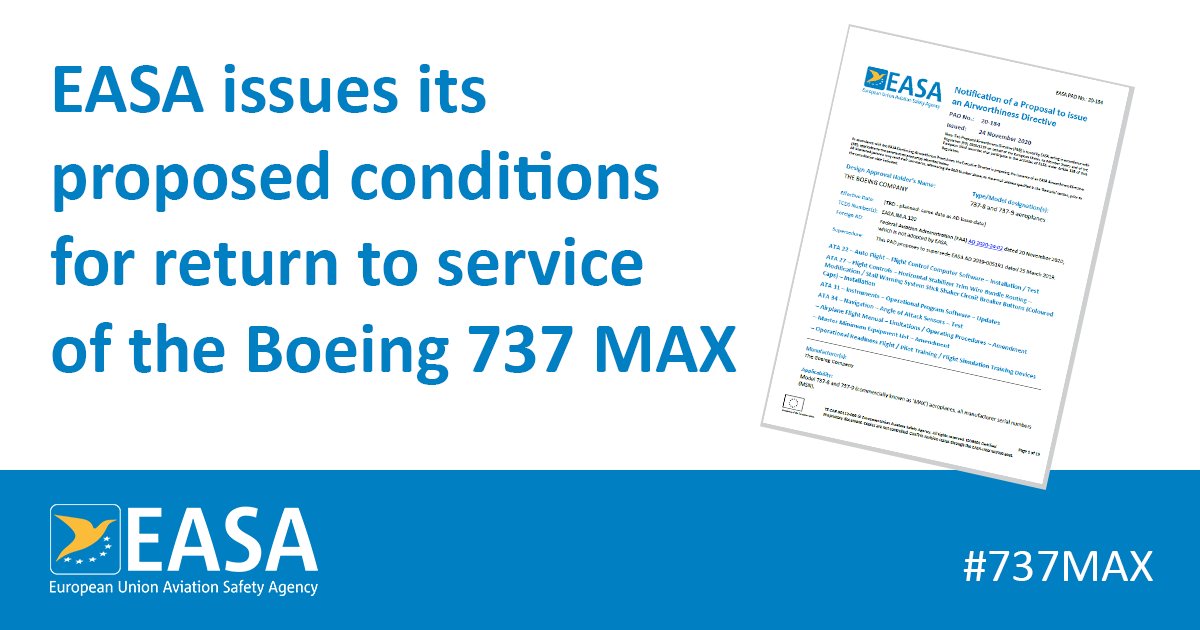 The Boeing 737 MAX was grounded by EASA on March 12, 2019, following two accidents with total loss of aircraft in which 346 people died. Intense work involving the dedicated attention from around 20 EASA experts over a period of around 20 months has now given EASA the confidence to declare the aircraft will be safe to fly again. The Federal Aviation Administration of the United States (FAA), State of Design for Boeing aircraft, published its final approval of the modified 737 MAX in the Federal Register on November 20, 2020.

“EASA made clear from the outset that we would conduct our own objective and independent assessment of the 737 MAX, working closely with the FAA and Boeing, to make sure that there can be no repeat of these tragic accidents, which touched the lives of so many people,” said EASA Executive Director Patrick Ky.

“I am confident that we have left no stone unturned in our assessment of the aircraft with its changed design approach,” he added. “Each time when it may have appeared that problems were resolved, we dug deeper and asked even more questions. The result was a thorough and comprehensive review of how this plane flies and what it is like for a pilot to fly the MAX, giving us the assurance that it is now safe to fly.”

Investigations into the two accidents showed that a primary cause in each was a software function programme known as the Manoeuvring Characteristics Augmentation System (MCAS), which was intended to make the aircraft easier to handle. However, the MCAS, guided by only one Angle of Attack (AoA) sensor, kicked in repeatedly if that sensor malfunctioned, pushing the nose of the aircraft downward multiple times and leading finally in both accidents to a complete loss of control of the aircraft.

“EASA’s review of the 737 MAX began with the MCAS but went far beyond,” Ky said. “We took a decision early on to review the entire flight control system and gradually broadened our assessment to include all aspects of design which could influence how the flight controls operated. This led, for example, to a deeper study of the wiring installation, which resulted in a change that is now also mandated in the Proposed Airworthiness Directive. We also pushed the aircraft to its limits during flight tests, assessed the behaviour of the aircraft in failure scenarios, and could confirm that the aircraft is stable and has no tendency to pitch-up even without the MCAS.”

Human factor analysis was another focus area – to ensure that the pilots were provided with the right alerts in the cockpit if a problem arose, along with the procedures and training needed to know how to respond. A fundamental problem of the original MCAS is that many pilots did not even know it was there. In the accident version of the aircraft, there was no caution light to make a pilot aware that the AoA sensor was faulty, making it almost impossible to determine the root cause of the problem.

That is why EASA now proposes that the changes to the aircraft design which will be required by the final Airworthiness Directive will be accompanied by a mandatory training programme for pilots, including flight simulator training, to ensure that the pilots are familiar with all aspects of the flight control system of the 737 MAX and will react appropriately to typical failure scenarios.

The EASA Proposed Airworthiness Directive is now open for a 28-day consultation period. Once that ends, EASA will take time to review the comments made, before publishing its final Airworthiness Directive. That final publication is expected from mid-January 2021 and will constitute the formal ungrounding decision of the plane for all 737 MAX aircraft operated by operators from EASA Member States. After the return to service, EASA has committed to monitor the plane closely in-service, to allow for early detection of any problems that may arise.

In conjunction with the Proposed Airworthiness Directive, EASA also issued a Preliminary Safety Directive for 28-day consultation. This will require non-European airlines which are holders of EASA third country operator (TCO) authorisation to implement equivalent requirements, including aircrew training. This will allow for the return to service of the 737 MAX when the aircraft concerned are operated under an EASA TCO authorisation into, within or out of the territory of the EASA Member States.

For details, see the text of the Proposed Airworthiness Directive.

EASA, and regulators in Canada and Brazil, worked closely with the FAA and Boeing throughout the last 20 months to return the plane safely to operations.

The EASA Proposed Airworthiness Directive requires the same changes to the aircraft as the FAA, meaning that there will be no software or technical differences between the aircraft operated by the United States operators and by the EASA member states operators (the 27 European Union members plus Iceland, Liechtenstein, Norway and Switzerland. The United Kingdom is until 31 December 2020 also treated as an EU member state.)

However, EASA’s requirements differ from the FAA in two main respects. EASA explicitly allows flight crews to intervene to stop a stick shaker from continuing to vibrate once it has been erroneously activated by the system, to prevent this distracting the crew. EASA also, for the time being, mandates that the aircraft’s autopilot should not be used for certain types of high-precision landings. The latter is expected to be a short-term restriction.

The mandated training for pilots is broadly the same for both authorities.

Before individual airlines can assign the plane to their flight schedules, they will need to complete all the software upgrades and maintenance actions described in the final Airworthiness Directive. They also need to train their 737 MAX pilots. As there are only a limited number of simulators, this may take some time to schedule. Some of this work can be started now, even in advance of the final Airworthiness Directive publication.

Some EASA member states issued their own decision prohibiting the operation of the 737 MAX last year for their sovereign airspace. These bans will need to be lifted before the aircraft can fly again in the airspace of these countries.  EASA is working closely with the relevant national authorities to achieve this.

EASA has also agreed with Boeing that the manufacturer will work to even further increase the resilience of the aircraft systems to AoA sensor failures so as to further enhance the safety of the aircraft. Boeing will also conduct a complementary Human Factor assessment of its crew alerting systems within the next 12 months, with the aim of potentially upgrading these to a more modern design approach.

The European Union Aviation Safety Agency (EASA) is the centrepiece of the European Union’s strategy for aviation safety. Our mission is to promote and achieve the highest common standards of safety and environmental protection in civil aviation. Based in Cologne, the Agency employs experts and administrators from all over Europe.