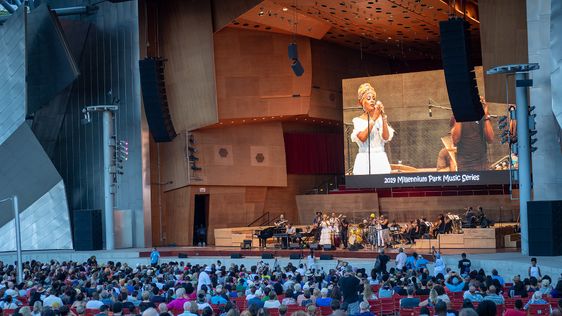 CHICAGO, IL, 2021-Jul-23 — /Travel PR News/ — Mayor Lori E. Lightfoot and the Department of Cultural Affairs and Special Events (DCASE) today announced more details for “Chicago In Tune” (August 19 – September 19), a new citywide festival celebrating Chicago’s diverse and legendary music scene and the 2021 Year of Chicago Music. This month of music will bring together iconic neighborhood venues, presenting organizations and musicians from across the city to celebrate all music genres and forms — with hundreds of free and ticketed events at dozens of venues. The festival is part of “Open Culture” — just one component of the Mayor’s “Open Chicago” initiative to safely and fully reopen the city.

“Our city is our music — heard and felt in every church, club, park, dance hall, bar, concert venue and sidewalk in every corner of our city,” said Mayor Lightfoot. “I want to thank each and every City, arts, community and business leader who partnered with us to Open Chicago during this Year of Chicago Music — as well as our very own residents, whose diligence in following public health guidance has allowed our city’s rich, diverse and legendary cultural scene to bounce back and become more resilient than ever before.”

“Chicago’s arts landscape has been devastated by the pandemic, but I’m excited to see our talented musicians, music clubs, concert halls and festivals come back to life and energize Chicago,” said DCASE Commissioner Mark Kelly. “During this 2021 Year of Chicago Music, our Chicago In Tune festival will emerge as a joyous month-long celebration of Chicago’s amazing music scene. The arts have suffered greatly, but culture is coming back to Chicago — big time.”

The public will find the most comprehensive listing of events at Do312.com/ChicagoInTune — and event highlights in a festival guide inserted in the August 19 edition of the Chicago Reader.

Following are details for Chicago In Tune programs presented or co-presented by DCASE.

Music Lives Here (MusicLivesHere.site), a multi-media project by DCASE, Chicago graphic art studio Sonnenzimmer and Maya Bird-Murphy of Chicago Mobile Makers, will pay tribute to the spaces, places and people that have shaped Chicago’s music landscape, past and present. Launching on August 29, Music Lives Here will take the form of unique graphic sidewalk markers installed at 50 sites across Chicago, an accompanying website to provide a further window into the background of each site, a print publication and pop-up performances.

DCASE’s Professional Development Program Series has been restructured in response to the critical needs of the creative community. It now aims to support free programs that increase access to training, education and opportunities for emerging artists and small businesses. In 2021, grants were awarded to 23 professional development providers.

Events during Chicago in Tune include:

Millennium Park summer programming — made possible in part by the Millennium Park Foundation — will also include 10 genre-defying concerts at the iconic Jay Pritzker Pavilion as part of the Millennium Park Summer Music Series (Mondays, August 2 – September 13 at 6–8:30pm, and Thursdays, September 2–16 at 6– 8:30pm, MillenniumPark.org). This year’s series is putting Chicago on stage — aligned with the City’s artist relief efforts and featuring a nearly all-Chicago lineup filled with debuts, new works, commissions and special collaborations. The series is also co-curated with a diverse group of Chicago venues, organizations and artists.

You may also be interested in:  The city of Chicago offers free holiday cheers at the Millennium Park Campus

Special music events throughout Millennium Park include a free, outdoor event presented by the Joan W. and Irving B. Harris Theater for Music and Dance (HarrisTheaterChicago.org): “INTERPLAY” curated with composer, trumpet player, and multi-instrumentalist Sam Trump on the Harris Theater Rooftop (August 22). “Sonic Pavilion” (August and September, ESS.org) is a series of sound installations commissioned by Experimental Sound Studio for the overhead trellis loudspeaker array at the Jay Pritzker Pavilion. Compositions utilize the entire surface of the trellis’s 60-channel system, resulting in an immersive canopy of sound — a fluid sonic architecture that bridges the focus of a live performance and the majesty of the surrounding cityscape.

Special music events at the Jay Pritzker Pavilion during Chicago In Tune include “Baroque in the Park” presented by Music of the Baroque (September 10 at 6:30–8pm, Baroque.org).

This summer, DCASE and the Millennium Park Foundation are pleased to present two films in Millennium Park, on its state- of-the-art, 40-foot LED screen — including (during Chicago In Tune) “The Wiz” (1978, G) on Tuesday, August 24 at 6pm. Rained out when it was screened as part of the 2019 Summer Film Series, this American musical adventure fantasy is presented to celebrate the 2021 Year of Chicago Music.

Chicago SummerDance in the Parks (ChicagoSummerDance.org) returns this summer, presented with the Chicago Park District. Dancers of all ages and skill levels are invited to take part in family and creative activities from 4:30–5:30pm and introductory dance lessons by professional instructors followed by live music and dancing from 5:30–7:30pm except where noted.

You may also be interested in:  Chicago Department of Cultural Affairs and Special Events Announces 2020 dates of its marquee festivals, events and exhibitions

House City (ChicagoHouseMusicFestival.us) is a new, 10-part series of free events popping up throughout the summer in the neighborhoods that helped create the House music genre over 35 years ago.

¡Súbelo! (WorldMusicFestivalChicago.org) is September 4 in the Pilsen neighborhood — a celebration of Latinx music and culture; lineup TBA.

DCASE programming is supported by the Chicago Transit Authority.

YEAR OF CHICAGO MUSIC + MUSIC IN THE KEY OF CHICAGO:

In partnership with Choose Chicago and marketing agency FCB, Chicago has unveiled its first ever music brand, “Music in the Key of Chicago.” Leveraging this new brand positioning, Choose Chicago is launching a major regional and national marketing campaign. DCASE and the local music industry are developing a local awareness campaign that includes digital billboards, advertising on CTA trains and busses, advertising at O’Hare, radio, community and minority-owned media and more.

The Year of Chicago Music is co-chaired by Commissioner Mark Kelly alongside Margaret Murphy-Webb, Juan Díes, Juan Teague and Che “Rhymefest” Smith. The ambitious effort is led by a steering committee, an intergovernmental group and 12 working groups focused on venues and clubs, festivals and special events, youth and education, equity and diversity, marketing and more. Over 200 individuals have volunteered to serve on these working groups and committees, representing more than 150 music organizations, entrepreneurs and individual artists. DCASE has supported over 80 music organizations granting more than $1 million in general operating and project support — and provided over $500,000 in individual grants to 130 artists in 2020 and 2021. For updates, visit Chicago.gov/Music and YearofChicagoMusic.org and join the conversation on social media using #YearofChicagoMusic and #ChicagoInTune.

The 2020/2021 Year of Chicago Music follows the success of the City’s 2017, 2018 and 2019 initiatives, which highlighted Chicago’s public art, creative youth and its vibrant theatre scene. This year’s mission is to place a spotlight on Chicago’s music landscape — one of the most influential and dynamic musical sectors on the globe — highlighting its legacy, expanding its audience and strengthening the sector.

Other DCASE event, venue and artist photos are available upon request.

To request media credentials or photos for all other events, please contact the event organizer or venue.

The Department of Cultural Affairs and Special Events (DCASE) is dedicated to enriching Chicago’s artistic vitality and cultural vibrancy. This includes fostering the development of Chicago’s non-profit arts sector, independent working artists and for-profit arts businesses; providing a framework to guide the City’s future cultural and economic growth, via the Chicago Cultural Plan; marketing the City’s cultural assets to a worldwide audience; and presenting high-quality, free and affordable cultural programs for residents and visitors. For more information, visit chicago.gov/dcase.