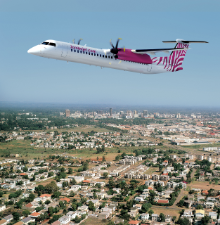 Montreal, Canada, 2017-Apr-30 — /Travel PR News/ — Bombardier Commercial Aircraft confirms that Ilyushin Finance Co. (IFC) has converted an option on one Q400 aircraft to a firm order. The Moscow-based leasing company, now with two Q400 on firm order, has successfully concluded a leasing agreement with Jambojet Limited (Jambojet) of Kenya for both aircraft.

“This agreement for these next generation turboprops signifies a key development in IFC’s international leasing business,” said Alexander Rubtsov, Director General, IFC. “The demand for high-performance turboprops, such as the Q400, continues to expand and we are pleased to enter into this new lease with Jambojet.”

“We are impressed with the level of professionalism that IFC exhibited throughout the process that led to this first agreement, and are delighted to have found a trusted and reliable partner to support our development plans,” said Willem Hondius, Chief Executive Officer, Jambojet. “The Q400 aircraft’s performance has exceeded our expectations on all fronts. With its low operating costs and best-in-class passenger experience, the Q400 turboprop has helped us optimize and expand our operations and is undeniably the backbone of Jambojet’s growth strategy.”

“We are proud of the Q400 aircraft continued success in Africa. Jambojet’s operations illustrate the capabilities and qualities of the Q400 aircraft that make it uniquely suitable for the region,” said Jean-Paul Boutibou, Vice President, Sales, Middle-East and Africa at Bombardier Commercial Aircraft. “The Q400 is a valuable asset for owners and operators, and we are confident that IFC and Jambojet will find many more opportunities to mutually benefit from the aircraft’s outstanding economics and performance.”

Bombardier has recorded firm orders for a total of 573 Q400 aircraft.

Jambojet, a low cost airline, operates on domestic routes from Nairobi to Mombasa, Eldoret, Kisumu, Lamu, Malindi and Ukunda (Diani).  It set a regional record in 2016 by handling over 1,000,000 customers in less than two years of operation. This number is set to grow as more Kenyans and foreigners appreciate the benefits of low cost flying. About 30% of the Jambojet customers are actually first time flyers.

The Q400 aircraft backgrounder is available in the BCA Media Hub

For information about Ilyushin Finance and Co., visit: http://www.ifc-leasing.com/about/