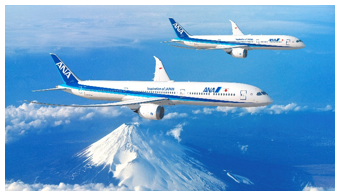 TOKYO, JAPAN, 2020-Feb-26 — /Travel PR News/ — ANA HOLDINGS INC. (hereinafter “ANA HD”) will expand its fleet with the mixed order of 20 new Boeing 787-10 and 787-9 aircraft, a move that leaves it well positioned for long term success as the airline increases its emphasis on sustainability. The decision was approved at today’s board meeting, and the order will include a firm order of 11 787-10 aircraft and nine 787-9 models (with four firm order and five optional). The 787-10s, which has been selected to serve the airline’s domestic routes, will enter service between FY2022 and FY2024, with the 787-9s, scheduled for international service beginning in FY2024 and concluding in FY2025.

“Boeing’s 787s have served ANA with distinction, and we are proud to expand our fleet by adding more of these technologically advanced aircraft,” said Yutaka Ito, Executive Vice President of ANA and ANA HD. “These planes represent a significant step forward for ANA as we work to make our entire fleet more eco-friendly and to reduce noise output. Introducing the 787-10 on the domestic routes will help ANA Group maintain its leadership role and improve our ability to operate as a responsible corporate citizen.”

The Boeing 787 harness advanced aircraft design materials, significantly improving its efficiency compared to the Boeing 777 planes currently deployed by ANA. Replacing the domestic 777s with the 787s will allow ANA to achieve 25 percent better fuel efficiency. Because the 787 also generates less sound that the 777, the move will also reduce noise emissions.

Prior to this announcement, ANA HD had ordered 83 787s, with 71 of those aircraft currently in service with the airline. If all 20 planes enter service, ANA will operate a total of 103 787s by FY2025. The newly ordered planes will utilize engines manufactured by GE Aviation.

ANA HD considers a range of factors when adding aircraft to its fleet, and the Boeing 787 was selected after a thorough evaluation process determined that it would best meet ANA HD’s goals while helping the airline boost service and hospitality.

About ANA
Following the “Inspiration of Japan” high quality of service, ANA has been awarded the respected 5-Star rating every year since 2013 from SKYTRAX. ANA is the only Japanese airline to win this prestigious designation seven years in a row. Additionally, ANA has been recognized by Air Transport World as “Airline of the Year” three times in the past 10 years – 2007, 2013 and 2018, becoming one of the few airlines winning this prestigious award for multiple times.

ANA was founded in 1952 with two helicopters and has become the largest airline in Japan, as well as one of the most significant airlines in Asia, operating 78 international routes and 118 domestic routes. ANA offers a unique dual hub model which enables passengers to travel to Tokyo and connect through the two airports in the metropolitan Tokyo, NARITA and HANEDA, to various destinations throughout Japan, and also offers same day connections between various North American, Asian and Chinese cities.

ANA has been a member of Star Alliance since 1999 and has joint venture partnerships with United Airlines, Lufthansa German Airlines, Swiss International Airlines and Austrian Airlines.

In addition to the full service and award-winning record of ANA, the ANA Group’s subsidiary Peach Aviation Limited is the leading LCC in Japan, and has expanded following the integration of Vanilla Air Inc. in late 2019. The ANA Group carried 54.4 million passengers in FY2018, has approximately 43,000 employees and a fleet of 260 aircraft. ANA is a proud launch customer and the biggest operator of the Boeing 787 Dreamliner.