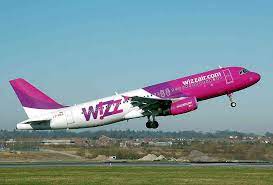 2 BASED AIRCRAFT AND 18 NEW ROUTES STARTING IN AUGUST

Budapest, Hungary, 2021-Jun-18 — /Travel PR News/ — Wizz Air, Europe’s fastest growing airline announced today (JUN 15, 2021) its 6 Italian base, in Naples together with 18 new international and domestic routes. The airline will base 2 Airbus A321 aircraft at Naples airport in August and September 2021. The 18 new services to 9 countries announced today, will complement the already operated 8 routes from Naples airport. Seats for the new routes can already be booked on wizzair.com or on the airline’s app from as low as EUR 9.99*

Wizz Air started flying to Italy in 2004, and since then has carried over 40 million passengers to and from Italy on its over 200 routes. Wizz Air is dedicated to continue developing its network and making affordable travel accessible to an ever increasing number of people. With the experience of providing low fare high quality services in the past 17 years. The establishment of Wizz Air’s newest, 44 base in Naples follows the opening of five bases (Milan Malpensa, Catania, Palermo, Bari and Rome Fiumicino) of the airline in Italy.

Wizz Air is dedicated to continuously developing its offer from Italy and establishing itself as the most trusted and sustainable player among Italy’s top 3 airlines. Today’s announcement enables WIZZ to offer customers more low fare, high quality connections from Italy’s 3 largest city and connect Naples with a number of fantastic domestic and international destinations.

Not only will the opening of this new base in Rome bring more economic growth to the region, but will also create over 30 new direct jobs with the airline and over 1,100 jobs in associated industries. The 2 Airbus A321 aircraft will support the operations of 18 new routes to Milan Linate, Olbia, Lampedusa, Verona, Turin, Santorini, Chania, Mykonos, Ibiza, Fuerteventura, Tenerife, London Luton, Prague, Tallinn, Reykjavik, Tel Aviv, Casablanca, Sharm el Sheikh totalling 26 destinations from Naples in 2021. Today’s announcement will quadruple Wizz Air’s seats on sale in Naples and will reach almost 1,5 million annual seats. Wizz Air’s growingNaples networkwill support local tourism, bring more capital to the region as well as connect the South Italian city with new and exciting, currently unserved destinations such as Tallinn, Reykjavik and Fuerteventura.

Wizz Air continues to offer its recently announced and already very popular domestic Italian Wizz Air Discount Club. The 12 months membership provides travellers with a guaranteed discount from the ticket price of all Italian domestic Wizz Air flights above 14.99€, as well as a 2€ discount for WIZZ Priority(subject to availability). The Domestic Wizz Air Discount Club membership starts at only 19.99€ per year.

Wizz Air is an investment grade credit rated airline, with a fleet of an average age of 5.4 years comprising of the currently available most efficient and sustainable Airbus A320 and Airbus A320neo family single aisle aircraft. In line with the company’s sustainability actions, Wizz Air’s carbon-dioxide emissions were the lowest among European airlines in FY2019 (57.2 gr/km/passenger). Wizz Air has the largest order book of over 250 aircraft of the state-of-the-art Airbus A320neo family which will enable the airline to further reduce its environmental footprint in Italy as well as across its entire network.

Wizz Air has introduced a new era of sanitized travel across its network, with enhanced hygiene measures to ensure the health and safety of passengers and crew. Click here to view Wizz Air’s new health and safety video.

By adding WIZZ Flex to a booking, passengers can rest assured that if circumstances change, or they simply wish to travel on a different date, or to a different destination, they can rebook on any WIZZ flight of their choice. Providing that extra layer of protection for passenger bookings, is a peace of mind during these uncertain times.

Wizz Air is continuously recruiting Italian speaker crew members to its recently established Italian bases where the airline is offering more than 100 jobs. Those interested can apply on Wizz Air’s career site.

Speaking at the press conference in Naples today, George Michalopoulos, Chief Commercial Officer of Wizz Air Group said: “I am delighted to announce Wizz Air’s newest base at Naples International Airport and the quadrupling of our capacity at the airport and the quadrupling of our capacity at the airport. Wizz Air’s 6 Italian base together with the basing of 2 Airbus A321neo aircraft and the addition of 18 new routes is a further testament to the airline’s firm plan to establishing itself as the most trusted and sustainable player among Italy’s top 3 airlines. It is a true honour to serve Italy’s third biggest city and support the ramp up of the local economy and the tourism sector.  Our brand new A321neo aircraft as well as our enhanced protective measures will ensure the best possible sanitary conditions for travellers while operating with the lowest environmental footprint. We look forward welcome passengers back on board with great service and a smile”

* One-way price, including administration fee. One carry-on bag (max: 40x30x20cm) is included. Trolley bag and each piece of checked-in baggage is subject to additional fees. The price applies only to bookings made on wizzair.com and the WIZZ mobile app. Number of seats at indicated prices are limited.