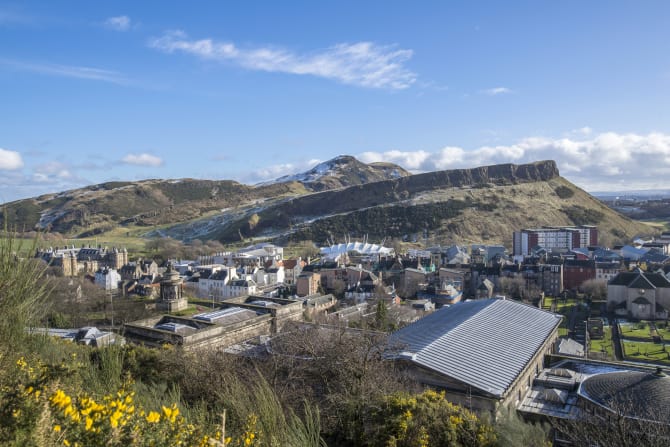 Great Britain provides some of the locations for the film, as well as offering adventure-seekers the chance to follow in the legendary hero’s footsteps with links to the Arthurian legend to explore and the chance to live like a King (at least for a day or two…..)

England offers a wealth of opportunity for a King Arthur inspired adventure, taking in ancient historic sites with claim to both the real-life legend and the dramatic locations that formed the backdrop for the film.

In Cumbria lies the rumoured site of King Arthur’s Round Table, a Neolithic earthwork henge, dating from about 2000 BC, but much later believed to be King Arthur’s jousting arena. Legend has it that Cumbria’s capital Carlisle was King Arthur’s Camelot (or his headquarters), with Arthur and his adviser Merlin most likely making use of the Roman fortifications. From Carlisle take a trip to nearby Hadrian’s Wall, where Birdoswald Roman Fort is one of the best preserved of the 16 forts. The area could have been the site of Camelot, but the more likely Arthurian connection is Arthur’s final Battle of Camlann, which was said to be fought near the site. For a true taste of the battlefield, visit between April and September 2017 for the brand new wall-wide exhibition of Roman Cavalry. Also in the area, Northumberland’s, Alnwick Castle (more recently famous as Harry Potter’s Hogwarts), is according to medieval writings, the castle of Lancelot, King Arthur’s Knight.

Visitors to the South of England should start in Cornwall at the iconic clifftop ruin of Tintagel Castle, which lays claim to being on the site where Arthur was conceived. Hampshire’s Great Hall of Winchester, one of the finest surviving aisled halls of the 13th century, is according to legend, home to the actual round table around which King Arthur and his Knights of the Round Table met. Finally, in Somerset, the mystical town of Glastonbury, is home to the ruins of a 2,000 year old Abbey, said to be the final resting place of King Arthur in the mystical Isle of Avalon and where Lancelot bought Guinevere’s body after she is said to have died at nearby Amesbury Abbey.

The iconic Windsor Great Park will play its part in the 2017 film release. No stranger to a film crew, the Park has formed a backdrop for films ranging from Harry Potter and Snow White and the Huntsman to World War Z. The 4,800 acres of parkland is itself shrouded in myths and legends, said to be visited by the ghost of Herne the Hunter on a phantom black stallion. For day time visitors it’s a tranquil escape complete with Deer Park, cycle and walking trails and gardens.

Scotland is the land of myths and legends, with stories of the Loch Ness Monster, to the mystical ‘Kelpie’ (a supernatural water horse that was said to haunt Scotland’s lochs and lonely rivers) and ‘Selkie’ (mythical creatures that could transform themselves from seal to human form and back again).

Not only does the stunning Quiraing on the Isle of Skye serve as a filming location in the new film, but also Scotland is home to many connections to the Arthurian legend:

In Edinburgh, visitors can walk up Arthur’s Seat overlooking the historic city and could be standing where King Arthur and his knights once stood.

Stirling Castle is home to a Round Table, also known as the King’s Knot, which is in a field below the castle and which some experts believe belonged to King Arthur.

Drumelzier, a small town in the Scottish Borders, has an association with the King Arthur legend; Merlin is portrayed as a wild prophet of the woods, and it is said the grave of Merlin is located there.

There are other sites that are said to have links to the legend: Arthur’s Craigs in the west of Lanark; Arthurshiels Farm, north of Biggar and Loch Arthur in Dumfries. Loch Lomond is a large lake about twenty miles northwest of Glasgow. Geoffrey of Monmouth tells of an offensive by King Arthur against the Picts and Scots at Loch Lomand.

Guinevere also has her place in Scottish mythology. Outside Meigle, in Perthshire, a Pictish standing stone is said to depict Guinevere’s death. She is shown being pulled apart by dogs, punishment for her infidelity.

A visit to Urquhart Castle on the banks of Loch Ness is ideal for a glimpse of medieval life and to be captivated by wild natural beauty and 1,000 years of history. Keep an eye out for Nessie from atop its towers!

Wales lays claim to many haunts associated with the legend of King Arthur, his mighty sword Excalibur and fabled magician Merlin. The first known reference to him was in a Welsh poem written in around AD 594, and Arthur’s tale is deeply engrained in Welsh folklore and recalled in many place names. His links to Wales are so strong that almost every region in the country has its own set of myths, connecting Arthur and his court to the land here.

Visitors can plan an own early medieval adventure by visiting our ancient hill forts, standing stones, mysterious lakes and dented rocks, said to have been struck by the hooves of the great king’s horse.

Maen Huail in the North Wales town of Ruthin: this stone-with-a-story is said to have been the chopping block Arthur used to slay a love-rival, Huail. Heading coast-wards, Carn March Arthur near Aberdovey in Mid Wales bears what is alleged to be the hoof-print of Arthur’s horse Llamrai, imprinted during a hectic monster-slaying session. Legend also has it that in North Wales Arthur killed off Mount Snowdon’s resident giant, Rhita, and his men supposedly covered the corpse in stones at the summit of the peak.

Two Welsh lakes, Llyn Llydaw and Llyn Ogwen, claim to be the watery resting place of Arthur’s sword, which was so powerful it had a name – ‘Excalibur’ in English and ‘Caledfwlch’ in Welsh. Both are in the Snowdonia National Park in North Wales, and while Llydaw is inaccessible, Llyn Ogwen is popular with walkers heading up dramatic Tryfan.

Head to the Preseli Hills in Pembrokeshire, South West Wales, and pay homage to the warrior at Bedd Arthur, a set of standing stones said to mark Arthur’s final resting place – a title claimed by other spots in Wales too. Beautiful Bardsey Island – off the Llŷn Peninsula in North Wales – is believed by some to be the Isle of Avalon from Arthurian legend; apparently Arthur sleeps in a cave there, waiting to rise up and save Wales in its direst hour of need …

To discuss press trips, or request images and other information, please contact the relevant tourism organisation:

For more on films made in Scotland, check out ‘Set in Scotland: a Film Fan’s Odyssey’. This is available to download from: www.visitscotland.com/film

2017 is Scotland’s Year of History, Heritage and Archaeology. 2017 is the year to delve into the past and discover Scotland’s fascinating stories. For more information go to www.visitscotland.com/hha2017

In 2017, Visit Wales are celebrating Wales’ Year of Legends. Wales is steeped in a deep tradition of storytelling, packed with grand landscapes and interesting characters. During our Year of Legends, we’re inviting visitors to learn about our epic stories, legendary heroes, and also the emerging greats that will be the stars of tomorrow. For more, visit www.visitwales.com