Bangkok, Thailand, 2013-11-20 — /travelprnews.com/ — The demonstrations in Bangkok remain normal and are mainly taking places at the Democracy Monument, Phan Fa Bridge and Makkawan Bridge on Ratchadamnoen Avenue and Rajamangala Stadium on Ramkhamhaeng Road. Security has been stepped up at the four protest sites and at the Constitutional Court of the Kingdom of Thailand on Chaengwattana Road.

The Constitutional Court has ruled that the amendment bill on senators’ qualifications and elections violated Article 68. However, the court dismissed petition for dissolution of six coalition political parties. Both anti- and pro-government protestors appeared to be satisfied with the court’s verdict, although both camps voiced different opinions on the ruling.

Life in Bangkok and all other areas of Thailand continues as per normal. Tourist attractions and activities as well as businesses in Bangkok and other provinces are not affected, and continue as usual as seen in these THAI LIVE CAM streaming cameras that present a number of stunning preset views of Thailand’s most famous and popular destinations including Chiang Mai, Ko Samui and Nong Khai.

Given the rallies on Ratchadamnoen Avenue, which is near Government House and the Parliament, roads around or within the areas may be temporarily closed to traffic. The mobilisations and gatherings of protestors in some other parts of the city, including at Rajamangala Stadium on Ramkhamhaeng Road and the Constitutional Court of the Kingdom of Thailand on Chaengwattana Road, may disrupt traffic at certain times.

While travelling within Bangkok and its vicinity, tourists are advised to check travel route and traffic situation as well as avoid areas where crowds may gather. This is because there may be traffic disruptions or delays and thus causing inconvenience.

Security has also been stepped up at importance places in Bangkok, including the Ministry of Foreign Affairs, embassies and airports, and other provinces’ administration halls to prevent ill-intentioned people from inciting violence.

Tourists need not be alarmed of the presence of security forces and checkpoints in Bangkok. Police are deployed to provide security in the city. Traffic police are also stepping up efforts to ensure traffic flow in the city.

As a precautionary step to ensure order in Bangkok, the Thai Cabinet has approved the use of the Internal Security Act in three districts – Dusit, Phra Nakhon and Pom Prap Sattru Phai or areas surrounding the Government House and Parliament – until 30 November 2013.

In addition, the Ministry of Interior has authorised provincial governors to invoke the Disaster Prevention and Mitigation Act, where and when necessary, also as a precautionary measure to ensure law and order.

Both laws do not prohibit nor obstruct peaceful demonstration held within the bounds of the law, but they enable security agencies – police, military and civilian – to effectively prevent and mitigate, as much as possible, undue disruption or impact on the safety of the general public.

International and domestic airlines are operating flights between Bangkok and Thai cities, as well as destinations around the world, as per normal. 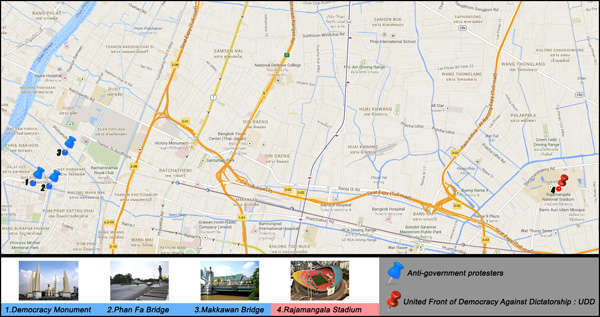