Sydney, Australia, 2013-11-7 — /travelprnews.com/ — Tourism Australia’s ambition to create the ‘world’s biggest social media team’ has taken another big step forward with its Facebook page,www.facebook.com/seeaustralia, hitting five million fans worldwide over the weekend – confirming its status as the most popular tourism destination page on the planet.

“Social media has become a crucial ingredient to the success of our campaigns, evident in our Best Jobs in the World campaign that was driven largely by social media with 612,000 worldwide applicants. And it will be instrumental again when we launch our new Food and Wine campaign next year,” he added.

Earlier this year Tourism Australia shared its social media successes, tips and hints with Australia’s tourism industry by publishing ‘The World’s Biggest Social Media Team’ on slideshare: http://bit.ly/seeaustralia. The presentation has received 150k views so far and the team has presented its strategy to over 10k industry members helping and encouraging more operators to engage with audiences on social media.

Tourism Australia has not been afraid to court controversy on the popular Facebook page, with the recent post of “Big Baz” the kangaroo quickly going viral causing a stir around the world http://youtu.be/Jo–p3O1-LI.

“Everyday we’re increasing our presence on social media, including major Asian social media platforms such as Weibo and Tudou. We know more people now search and book their holidays online and there’s a huge opportunity here for operators to plug into and get their products and experiences noticed on a global stage,” Mr McEvoy said. 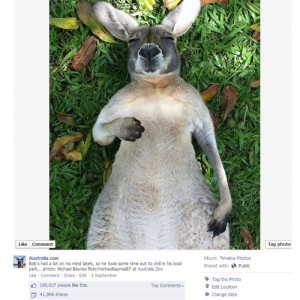