Visitors will find both Boston (white) and Manhattan (red) chowders to sample, cooked up at colorful booths along the Boardwalk.  More than just a cooking competition, the Clam Chowder Cook-Off is an entertaining event with costumed participants boasting punny team names  like Clamilton – An American Chowder, Madd Matt’s – Beyond the Chowder Bowl,  and Killer Klams from Chowder Space.

Former Top Chef competitor, Michael Midgley is returning for his third Clam Chowder Cook-Off.  Midgley, who runs Midgley’s Public House in Stockton is no stranger to tough competition, in addition to Top Chef, Midgley has appeared on TV’s Knife Fight and Cutthroat Kitchen.

Admission to the rain or shine event is free; tasting kits are $10 for 6 samples. Preparation starts at 10 am, cooking at 11 am, public tasting is from 1 pm – 3 pm. Winners will be announced at 4 pm on the Colonnade near Neptune’s Kingdom.

Boardwalk rides are scheduled to open from 11am to 6pm, weather permitting. For more information, including a PDF of the Program please visit http://www.beachboardwalk.com/clamchowder/ 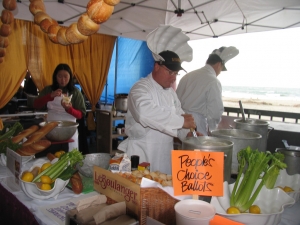